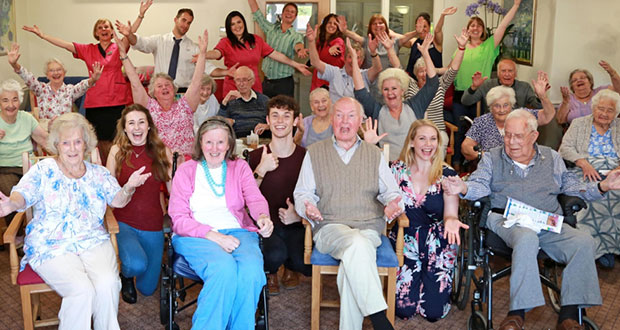 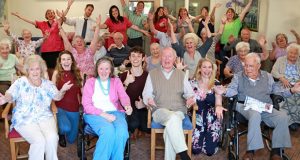 Leading cast members from the musical comedy Half A Sixpence took time out from their critically acclaimed run at Chichester Festival Theatre (CFT) to perform at the cathedral city’s newest care home.

Charlie Stemp, who plays orphan and central character Arthur Kipps, was joined by fellow actors Emma Williams and Devon-Elise Johnson to entertain residents at nearby Wellington Grange with songs and stories from the show.

“We were thrilled to have them here,” said 95-year-old Halcyon McLaren. “It was just like they were on stage. We wish we could have given them a standing ovation but as many of us are wobbly on our feet we will settle for giving them one with our hearts.”

The exclusive performance was arranged under a partnership between CFT and family-owned Colten Care who run Wellington Grange less than a mile from the theatre.

The aim of the partnership is to bring interactive theatre experiences directly into the home while offering residents, families and friends priority access to events and tickets at CFT.

Emily Hudson, Activities Organiser at Wellington Grange, said: “Theatre has been a big part of many of our residents’ lives. The Half A Sixpence visit was not only about giving those going to the show a sneak preview. It also meant that some residents who are unable to physically go the theatre could enjoy a version of their own with friends and family right here at Wellington Grange and with the real cast.”

Vicky Gregory, Corporate Manager at CFT, said: “The partnership with Wellington Grange is unique for us as a theatre. The Half A Sixpence visit was just the first of a number of bespoke events we are planning to create for the residents. The cast members were really excited about meeting them and performing.”

Based on an HG Wells novel, Half A Sixpence was originally written as a vehicle for pop star Tommy Steele. The plot revolves around Arthur unexpectedly inheriting a fortune and having to decide what truly matters in life. Competing for his heart are childhood friend Ann Pornick, played at CFT by Devon-Elise, and Helen Walsingham, played by Emma.

The revised version, which opened in Chichester in July to glowing reviews, was co-produced by Cameron Mackintosh with a script written by Oscar-winning Downton Abbey creator Julian Fellowes and new music and lyrics by George Stiles and Anthony Drewe, alongside original songs by David Heneker. The show runs at CFT until Saturday, 3 September.

To watch a short film about the Half A Sixpence visit to Wellington Grange, please visit www.WellingtonGrange.co.uk.