UK long term care for older people is a highly polarised marketplace where at one end those operators with a focus on private pay residents are doing relatively well, while at the opposite end those which cater mainly for government supported residents face becoming the latest financial failures in a sector which is already suffering from a greater annual capacity loss rate than growth rate.

Research published in the latest edition of healthcare experts LaingBuisson’s Care of Older People* market report has revealed that real terms fee reductions by local authorities, a result of the government’s on-going austerity drive, is now clearly the main driver for falling profits in a service provision market worth an estimated £16 billion per year.

With 90% of residential and nursing care services now delivered by independent providers, the report says that more than ever before there is strong evidence of a marketplace where healthy profits (25-30% of revenue) can only be made by those operators focusing on self-pay residents in affluent areas of the country.  Meanwhile, those homes catering mainly for publicly paid residents in non-affluent areas have sunk to a worryingly low profit levels hovering around the 15% mark – compared with over 20% five years ago.

While new investment for private payers remains strong, investment in new capacity has largely dried up in areas dominated by public pay, in the main part as a result of pressure on fee margins.

Latest half yearly figures from October 2014 to March 2015 (derived by LaingBuisson from registrations by CQC and other UK regulatory bodies), show that capacity loss from closures has for the first time exceeded, by 3,000 beds, capacity gain from new openings (see Figure One below).

According to LaingBuisson’s report, there were two ‘game changers’ for the care sector in 2015: postponement of Phase 2 of the Care Act; and the National Living Wage (NLW) announcement.

The care sector gave a collective sigh of relief when in July the government announced an unexpected plan to postpone Phase 2 of the Care Act from April 2016 to April 2020, as the measures were set to expose care home operators to further major financial risks.

However, the introduction of the NLW swaps out one major challenge for another – which will be especially severe for the financially exposed ‘public pay’ segment.

Care of Older People states that it is provisionally estimated that the additional costs expected from roll out of the NLW will mean a fall of about four percentage points in care home operating profits as a percentage of revenue, unless mitigated by higher fees.  Where private payers may have the capacity to pay higher fees to prop up this new cost, unless there is an injection of more government funding most local authorities do not. As such ‘public pay’ care home companies face the prospect of operating profits falling to a dangerously low level of around 10%, where even those with modest levels of gearing could face financial failure.

According to report author, and LaingBuisson CEO, William Laing, the big question now on the minds of both care company executives and local authority care commissioners is: Will the government make provision in the Comprehensive Spending Review, due in late November, to bale out care providers facing the threat of going underwater? 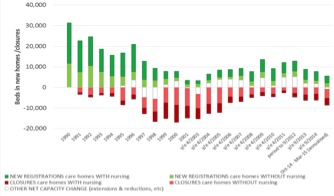 Giving his opinion on the realistic prospects for the ‘public pay’ segment of the care home sector, based on a ‘Capacity shortage’ mechanism for re-establishing market equilibrium, Mr Laing said:

‘The care home market is subject to a self-righting mechanism like any other market. Investment is curtailed when prices (as now) are insufficient to offer a reasonable return in areas of high public pay. As a result, against a background of rising demand, shortages can be expected to appear. Market power will shift towards providers, prices will rise and public authorities will be forced to find extra resources. The results of the 2015 Comprehensive Spending Review are set to be published at the end of November 2015: LaingBuisson’s prediction is that some new central government funding will be made available to local authorities in order to help the market to withstand the shock of implementation of the National Living Wage.

‘Nonetheless, whatever new money is injected it will in all probability be insufficient to re-establish the margins of care home operators with high exposure to public pay at the level they were prior to the 6% real terms reduction in councils’ baseline fee rates since the beginning of public sector austerity in 2011/12. Therefore, the “capacity shortage” scenario as described will in all probability continue to be played out at a variable pace in about 200 council areas’ before some sort of national equilibrium is restored, possibly before 2020.’