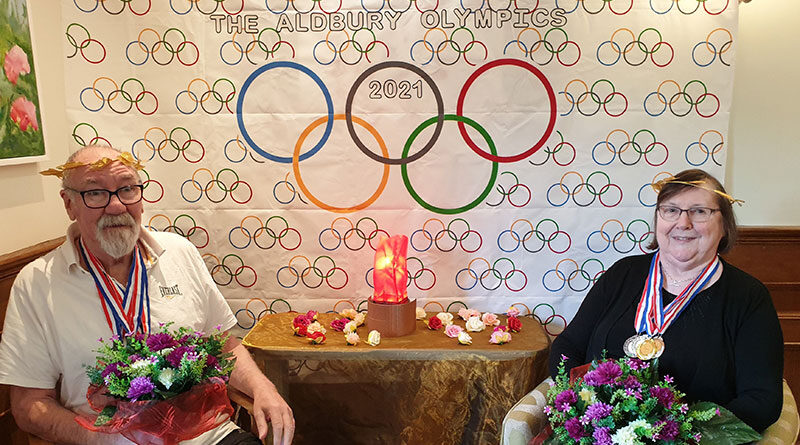 Residents of The Aldbury, owned and run by Colten Care, enjoyed gentle rivalry across 12 separate tournaments.

These involved games such as shuffleboard, hoopla, balloon tennis, keepie-uppies and even magnetic table-top curling.

To put everyone in the mood beforehand, staff decorated corridors and lounges with flags and pictures of the famous five coloured rings.

They also displayed an electric flame to mimic the traditional torch used to symbolise continuity between the ancient and modern games.

Different house groups at the Parkstone home competed in two activities each day with scores tallied to reveal the 12 overall winners.

There was a final-day medal ceremony featuring gold, silver and bronze badges and ribbons, with medallists donning laurel-leaf crowns in front of an Olympics-inspired backdrop.

Shuffleboard proved to be the most keenly contended game with spectators cheering on the competitors throughout.

In the end, Connie Davis managed to pip two fellow residents at the very last minute to win the tournament.

Delighted Connie, who also achieved medals in floor darts, keepie-uppie and curling, said: “I didn’t think I would win anything!”

Companionship Team Member Wendy Harrington said: “Connie was doubting her shuffleboard ability at the start but then proved to be a bit of a whizz after all. Given her success in multiple games, she became our queen of competitions.”

“Staying active is so important, especially during these extraordinary times, and this was a brilliant way to lift people’s spirits.

“It got better and better over the six days and it was great to see the interaction, encouragement and teamwork among residents and staff. It made quite an impression on many of our residents.

“Judging by all the smiles, everyone’s a winner at The Aldbury.”