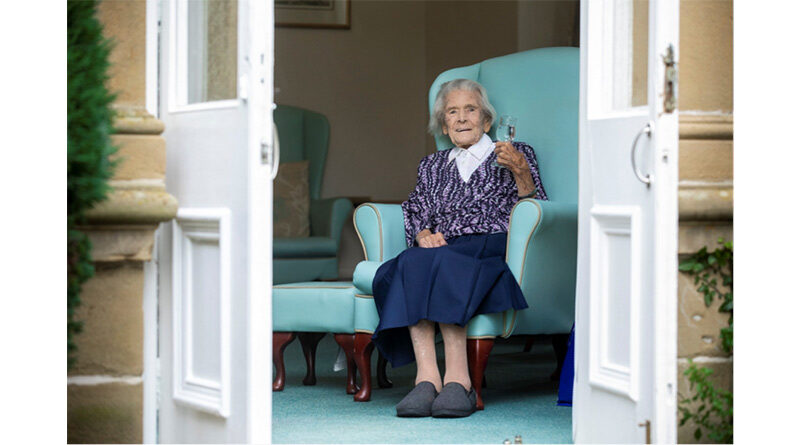 A remarkable globe-trotting former nurse who cared for soldiers injured in the 1940 Battle of Dunkirk is preparing to celebrate her 103rd birthday.

Travel pioneer Hilda Richards enjoyed regular coach trips until last year when had a wonderful time on unaccompanied holidays to Llandudno and Eastbourne.

Great great grandmother Hilda and her late husband Trevor took to travelling the world after she retired in the 1980s.

After Trevor died 10 years ago, Hilda lived alone until February of this year when she moved to Pendine Park’s Gwern Alyn Care Home where she says she’s “very happy”.

She was born in Ruabon on November 10 in 1917, almost a year to the day before the end of the First World War.

Fast forward to World War 2 and Hilda was a 23-year-old State Registered Nurse working at Liverpool’s Alder Hey Hospital when soldiers injured at Dunkirk were ferried around the coast and up the Mersey to be treated there.

Hilda vividly remembers the injured soldiers, many in battle dress torn to shreds and having suffered horrific burns, being brought in on stretchers and laid out in rows.

It was a real eyeopener for Hilda who was born and brought up in a cottage on the Wynnstay Estate, Ruabon.

“I left school at 18 at Christmas and in the January, I started at Alder Hey as a student nurse.”

“It was three years of hard training but in the first year you never got to see a patient it was all about mopping and cleaning floors and bathrooms.”

“Looking after gravely wounded soldiers from Dunkirk was an awful job but one I was privileged to do.

“It was so sad. The state many were in was horrible, especially the burns.

“I then transferred to Wrexham General Emergency Hospital in 1942 when she married Trevor who was serving in France.

“We had children from Alder Hey Hospital sent across the Mersey to us to escape the bombing.

“We also had two Jewish doctors who had escaped the Holocaust and found their way to Britain. We treated soldiers from all the Allies, Americans and Canadians, not just British.”

Son Ralph, 73, said: “She was living independently at home until she had a fall and was getting unsteady on her feet. She’s happy at Gwern Alyn.

She said: “Hilda really is an incredible woman who has done so much in her life. I can’t imagine what she went through nursing soldiers injured at Dunkirk and civilians injured in the Blitz.

“She has a remarkable memory and can recall in vivid detail what she and her fellow nurses went through before, during and after the war.

“Hearing all about her and Trevor, her husband’s travel exploits doesn’t surprise me in any way. She really is an amazing woman.”