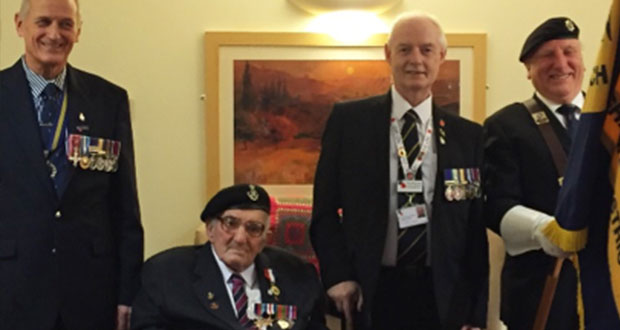 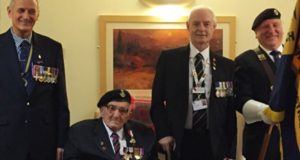 99-year-old Gilbert King, a resident at Cherry Garth care home in Holmer Green, has been honoured by the Netherlands government with a special medal for his part in the liberation of their country in World War Two.

Lieutenant Colonel Keith Edlin, President of Amersham Royal British Legion, presented him with the Liberation Medal at a special event held at Cherry Garth, which is run by local care provider and charity, The Fremantle Trust.

Born in Holmer Green, Gilbert joined the Queen’s Own Oxfordshire Hussars 63rd (Oxfordshire Yeomanry) Anti-Tank Regiment in 1939. In 1944 he landed at Dieppe and his regiment fought its way through France, Belgium and into the Netherlands. Gilbert was wounded in the left arm while under heavy artillery bombardment in Gennep but returned to battle just weeks later to play his part in the liberation of the Netherlands.

In Gilbert’s medal citation, the Dutch embassy wrote ‘The people of the Netherlands will forever remain grateful and will never forget these brave men and women who took part in the liberation of the Netherlands.’ As a token of gratitude, the Mayor of Gennep also sent an official lapel pin with an emblem of the city and a commemorative certificate.

From the Netherlands, Gilbert crossed the River Rhine into Germany and it was there he was sent to help in the liberation of Bergen-Belsen and witnessed the atrocities of the concentration camp. In 2014 he was reunited with eleven survivors of the Holocaust at the Oxfordshire museum, where a woman who survived Auschwitz and Belsen said, “The liberators represented the truth about heroism.”

Gilbert returned to village life in Holmer Green at the end of the war to resume his trade as a cabinet-maker and marry his late wife, Irene, whom he first met at school.

Commenting on the presentation, Lieutenant Colonel Keith Edlin, said: “Gilbert King went to fight for his country and for the freedoms we enjoy today. When WW2 veterans returned home they just got on with their lives and rarely spoke about what they had seen and done. They are an example to us all.”

Lynnette Evans, Service Manager at Cherry Garth added: “Gilbert is an extremely charismatic and much loved resident here. We are so proud of his incredible achievements. He is an unassuming hero with a compelling story to tell and is a popular member of the local community.”