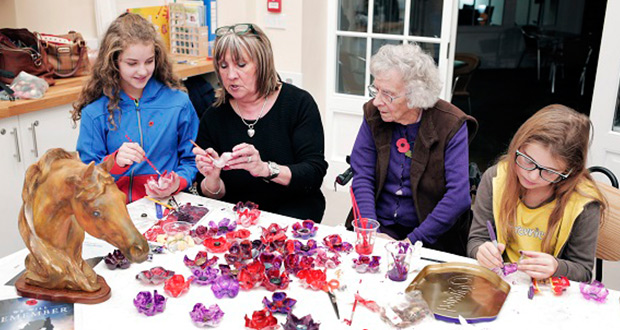 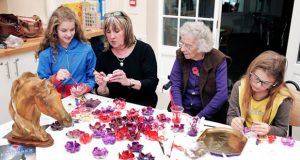 As part of the village’s activity to commemorate the 100th anniversary of the signing of the Armistice two horse figures have been created that will feature a display of purple poppies alongside the classic red ones.

Purple poppies commemorate the animals that were injured and lost their lives in conflict and were first introduced in 2006.  They can be worn alongside the traditional red one, as a reminder that both humans and animals have been, and continue to be, victims of war.

Gill Ashman, a Carer in Middleton Gardens at Middleton Hall and a former art teacher, worked with Living Well Manager, Audra Hunt, in co-ordinating the Hall’s activity to mark the Armistice commemorations.

She explained that the Middleton Hall installations were prompted by a war horse memorial unveiled in June near Ascot Racecourse that pays tribute to all the animals who served so bravely in WW1, which was named ‘Poppy’ in a national naming competition for Brownies and Guides.

“Purple poppies are increasing in popularity and many people wear them alongside the traditional red poppy to pay tribute to animals killed in warfare,” Gill said.

“The Animals in War Memorial Fund highlights that eight million horses, donkeys and mules died in the First World War and dogs and 100,000 pigeons also played a loyal and gallant part in one of the bloodiest conflicts of the 20th century.

“The Fund also describes how warfare has resulted in elephants, camels, oxen, bullocks, cats, canaries and even glow worms losing their lives in warfare.”

Over the past few weeks a series of workshops have taken place where Middleton Hall residents have created poppies for the 1918 commemoration displays by upcycling used plastic bottles and hand-colouring them.

“It’s been wonderful to involve the local community on another event and to welcome the Brownies and Guides to Middleton Hall which the residents absolutely loved.

“The whole project is a great example of how we do our best to go the extra mile for our residents to provide an environment where they can live active and fulfilling lives.”

The two horse installations consist of a wire-framed figure that has a trailing scarf made of wire, filled with plastic and felt poppies and an earthenware kiln-fired horse’s head covered with a matt-based horse skin made by Gill. It will have a garland of poppies in a mix of colours recognising the 39 men listed on the memorial in Middleton St George from the village and surrounding villages who died in the First World War as well as one who died shortly after the war.

The wire framed horse is being displayed in Middleton Hall and the earthenware figure with its garland will be used at the Cenotaph at Middleton St George on Sunday 11 November and then bought back for a special commemorative service at Middleton Hall later that day.