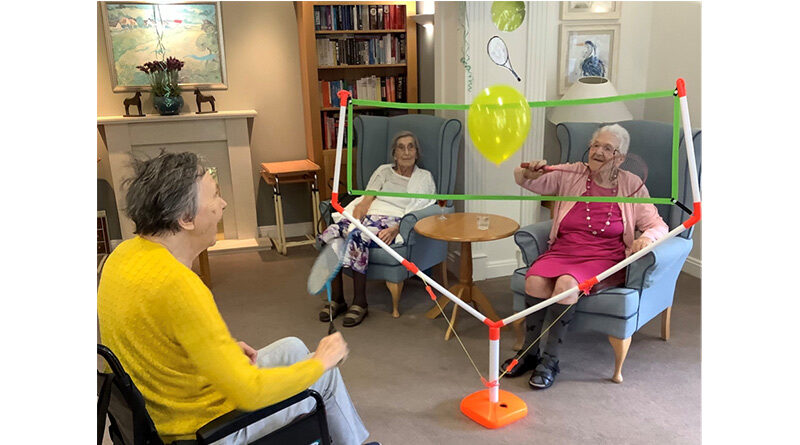 Forget Wimbledon, the place to be for enthralling racket and ball action this summer is clearly a Bournemouth care home.

Eight tennis-loving residents at Colten Care’s Avon Cliff competed in their own in-house version of the iconic tournament, including mixed doubles matches and a grand final involving the best two players.

The home’s lounge was converted into a playing court complete with net while competitors sought to win over their opponents using badminton rackets and balloons. Everyone playing received a miniature trophy to thank them for taking part.

The final, between residents Bella Kier and Sylvia Williams, was a closely fought affair which went to three match points before Bella eventually broke serve and won.

The delighted champion was then presented with a winner’s trophy, flowers, chocolates and champagne.

She said: “I thoroughly enjoyed the game. I was surprised I had the stamina to win and I’m over the moon, very happy.”

And gracious runner-up Sylvia said: “A big congratulations to Bella. It was a pleasure to compete against such a confident player.”

Sharon Surgeon, Avon Cliff Companionship Team Leader, said: “We’ve all had a lot of fun with our tennis tournament.

“Everyone was clearly inspired by the Wimbledon finals, insisting on full games and proper scoring.

“Well done to all competitors and hearty congratulations to Bella for triumphing in the end.”

Such is the degree of interest in tennis among Avon Cliff residents, Colten Care agreed an innovative tie-up with Bournemouth’s West Hants Club three years ago.

Under the partnership, residents at Avon Cliff and Colten’s Outstanding-rated Ferndown home Amberwood House were given opportunities to watch live matches in return for Colten supporting the club’s youth academy.

The West Hants was the club where the first ‘open era’ tennis tournament was staged in April 1968, widely seen as an early step on the way to today’s global professional sport.

Sharon added: “We aim to be as responsive as possible to our residents’ wishes. Many of them have a lifelong love of tennis and we’re delighted to help them continue their interest in any way we can.”