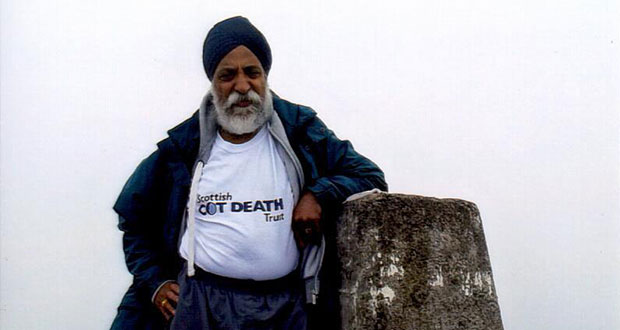 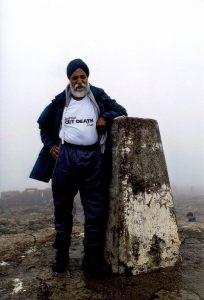 A 66 year old Glaswegian grandad has topped Scotland’s highest peak to complete a trio of events that saw him scale 2,430 metres and run 10,000 metres – raising £1,425 in the process.

What’s more, in his latest bid to raise money for The Scottish Cot Death Trust, he completed the 10km run and ascended Ben Nevis with just a four week gap in between.

Gurdev said: “It’s a great feeling having taken on three big challenges but an even bigger thrill to have raised such a great total for such a worthy cause.

“I’m looking forward to the next challenge and maybe bagging a few more Munros!”

Experiencing some bleak, drizzly weather on his climb up Ben Nevis and only being able to see up to thirty yards ahead at some points, Gurdev scaled and descended the mountain in a respectable eight hours.

Blessed by brighter and clearer skies during his Snowdonia climb, Mr Pall reached the top of Wales’ highest peak in just two and a half hours, completing the climb in five hours.

Gurdev, who has worked at Westland Court for five years, stayed motivated and committed to take on each challenge as he considered completing all three feats to be a personal goal.

As a fitness enthusiast, training for each event simply meant staying faithful to his usual fitness plan which consists of cycling, walking and 45 minute exercise routines.

Gurdev added: “I enjoy exercising with my family and my grandchildren keep me fit, with some regular country walks.

“It was great to get some support from my son who joined me on the10k and my wife came out to cheer us on every step of the way – and keep us well stocked in snacks at the end of the course!

“The tenants here at Westland Court are always very supportive of my endeavours and keep me highly motivated too.”

The Scottish Cot Death Trust, a charity that he has raised money for in previous charity events, was Gurdev’s charity of choice as he thought it important to raise funds for a smaller, local organisation that doesn’t have such widespread support.

The vast majority of the donations that made up the fantastic total were given by the Sikh community in Glasgow.