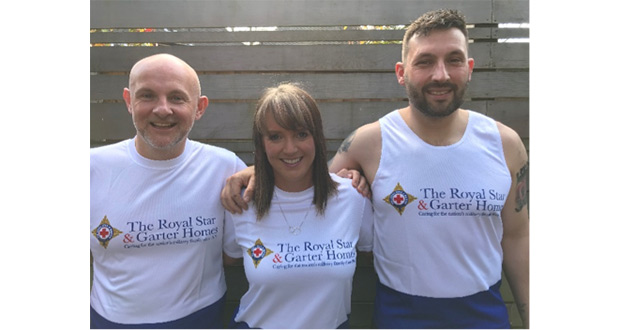 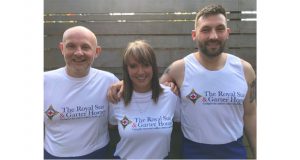 The relatives of two former residents and a Royal Navy Commando are running the Virgin Money London Marathon to raise money for The Royal Star & Garter Homes.

Joanna Arnold, Piers Fox and Rikky Toyer will all be taking part in their first ever marathons when they take to the streets of the capital on 28 April.

Piers’ grandfather and Joanna’s grandmother were both cared for by the Charity during the final years of their lives, while Rikky decided to run after being told about the work of the Charity. The Royal Star & Garter Homes cares for ex-Servicemen and women and partners who are living with disability or dementia.

Piers remembers helping grandfather Norman Knowles volunteer at the Charity’s old Home. In later years, Norman would become a resident there, before moving to the Surbiton Home. He died in 2016.

Norman served in the Army during the Second World War, and saw action in Myanmar (Burma), where he suffered a bullet wound to the leg.

Piers, 42, from Woking, said: “When I was a kid I would go with my grandad to the Richmond Home where he was a volunteer. I was eight or nine at the time and I would go up with him and help with the veterans.”

Piers is a Finance Controller for Apple, and the technology company is match-funding donations given by his work colleagues. He said: “I’m doing this to say thanks to the Charity for the care and support it gave my grandad. I believe we need to look after our veterans, and The Royal Star & Garter Homes does a great job of doing that. I’m hoping to raise as much as I can and I’m grateful to Apple for the match-funding. The Marathon’s not going to be easy but thinking of my granddad will help me.”

Joanna’s grandmother Muriel Webster lived at the Surbiton Home for two years before her death in August 2018. The 35-year-old, from Horsham, is also running to thank the Charity: “The care and love my Grandma received from everyone at The Royal Star & Garter Homes was amazing. I was blown away by it. It was a real home-from-home, not just for Grandma but us relatives too.”

Father-of-three Rikky, 36, is a Helicopter Engineer with the Commando Helicopter Force, based at RNAS Yeovilton. He is raising money for the Charity following a chance conversation: “A friend of mine told me about the Charity, and being in the military myself, I think it’s great. Maybe one day in the future The Royal Star & Garter Homes will be caring for me or someone I serve with.”