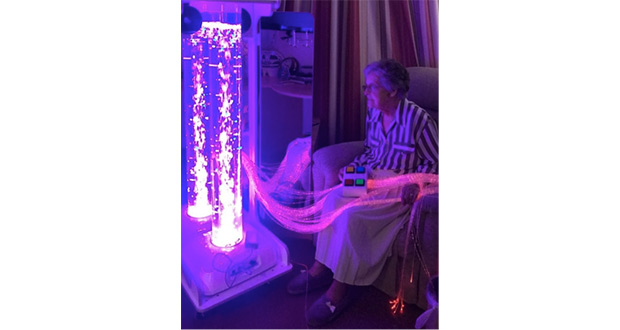 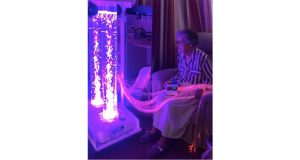 Trekking up Mount Snowdon and cycling from Manchester to Blackpool were just two of the challenges that have brought life-changing benefits to residents living with dementia at Belong care village in Atherton, Greater Manchester, through multi-sensory equipment, which was purchased from funds raised by the efforts of staff at the village.

The new equipment, called ‘Vecta Deluxe’, has been introduced by Belong to provide stimulation to those unable to engage in other activities, and is already showing remarkable results, including radical improvements for one resident, who has been unresponsive to most stimuli previously, yet held her husband’s hand and spoke his name for the first time in eight years.

‘Vecta Deluxe’ allows Belong to transform any room into a therapeutic environment for people receiving end of life care, or those living with dementia, anxiety or depression, and it is being hailed as a remarkable innovation by staff at the class-leading dementia care village; recently awarded an ‘Outstanding’ rating by the Care Quality Commission.

The new equipment combines a bubble column, projector, fibre-optics, aromatherapy diffuser and audio station and is being positioned in bedrooms for residents who are physically restricted and unable to engage in other activities within the village. It is welcomed by Gemma Willetts, Belong Atherton’s experience co-ordinator, who was instrumental in organising the fundraising campaign. She commented: “The results with residents have been fantastic. And I would go as far as saying, life-changing for some of them.

“It took a while to raise the funds, and many hours and days of sore limbs and physical challenges for our staff but the tremendous support from sponsors and also Hindley Green Family Church, which helped make this happen, has made it so worthwhile for those of our residents whose quality of life has improved as a consequence. I can’t thank them enough.”

The results at Belong Atherton have been so encouraging that staff at other Belong care villages across the North-West are now embarking on their own fundraising initiatives to purchase Vecta equipment.