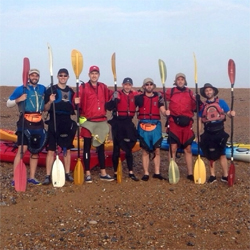 A group of friends from in and around London have crossed the English Channel in kayaks to boost funds for Alzheimer’s Research UK. The seven fearless fundraisers set off from Dungeness on the Kent coast at 7.45am on Tuesday 16 September and endured an eight-hour, 29-mile paddle across choppy waters before reaching Boulogne in France. Their heroic efforts mean the group, aged between 26 and 34, have now raised around £10,000 for the UK’s leading dementia research charity.

Brothers Jamie Levy, from Shenley, Hertfordshire, and Jonny Levy, from Hampstead Garden Suburb, were joined by pals Nick Rubin, from West Hampstead, Joshua Metliss, from Belsize Park, Justin Sloggett, from Sutton, James Griffiths, from London Bridge, and Michael Cavanagh, from Islington, for the extreme trip, which was close to being called off due to the poor conditions. The Channel is one of the world’s busiest shipping lanes, so the team relied on safety boats equipped with radar and tracking systems to detect oncoming ships and guide them safely across the water.

Jamie Levy, 34, a partner at commercial property and location agents Fidens, said:
“It was painful, fairly monotonous and a few scary-sized tankers passed close by, but we’re so pleased we did it, especially as the safety boat captain was so close to calling it off. Thankfully they had some faith in our ability and we were able to get going. It was like being in a big, watery room as there was poor visibility most of the way. There were a lot more waves than we thought there would be and we found ourselves going sideways a lot of the time due to the currents. It was a proper hard slog and took around eight hours. The first thing we did when we reached France was have showers and then went for steak and chips. We just couldn’t wait to get back to the UK and back to bed!”

He added:
“As a group we try and do something every year for charity that’s outside of our comfort zones and this year we really wanted to do something extreme. We’ve done the Tough Mudders, the triathlons, and after I read about a group of blokes who kayaked across the Channel I thought it was the perfect challenge. We had a vote about who to raise money for this year and we all decided Alzheimer’s Research UK was the perfect choice. We’re all living longer, so a lot more people are going to be facing dementia in the future and we wanted to help do something about it. Before we came up with the idea we didn’t have a clue even how to get into a kayak let alone paddle, so we’re so proud to have crossed the Channel for such a worthy cause.”

Jodie Vaughan, Community Fundraising Manager at Alzheimer’s Research UK, said:
“What a fantastic achievement! Their amazing efforts have helped raise around £10,000 for Alzheimer’s Research UK – enough to pay for 500 hours of pioneering dementia research. There are over 830,000 people across the UK living with dementia today, including over 68,000 in Greater London. Despite this, dementia research is desperately underfunded compared to other serious diseases. We rely on public donations to fund our world-class research and it’s thanks to the commitment of people like Jamie, Jonny, Nick, Joshua, Justin, James and Michael that we’re able to continue our crucial work.”