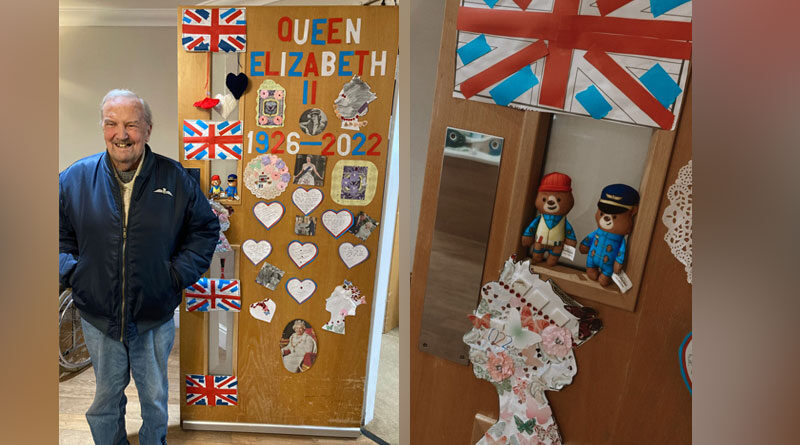 Staff and residents at Fleetwood Hall Care Home have been mourning and paying tribute to the Queen all week.

Following the sad news of Her Majesty’s death, residents have been sharing their stories and memories.

Bronnie recalls watching the Coronation as a young girl, Derek met the Queen while serving in the Navy and Kenneth had his RAF uniform inspected by Her Majesty.

Joanne Warren, Manager of Fleetwood Hall Care Home, a specialist residential and dementia care home in the heart of Fleetwood in Lancashire, said: “Everyone in the home has been very moved about the passing of The Queen.

“Throughout the period of mourning we have spent time following the events on television and paying our respects throughout the Queen’s final journey from Scotland to London. We have also spent time creating a memorial display, which has included crafts and memory hearts.
“We have loved listening to the stories of our residents and hearing their special memories of The Queen.

“This week we had a small afternoon tea during the Queen’s procession through London. On Monday we are planning to watch the funeral together as a home to pay our last respects together.
“Our chefs are busy creating a full home-made afternoon tea in honour of Queen Elizabeth and we’ll have some quiet time for everyone to sit, reflect and reminisce on the last seventy years.”

MEMORIES OF THE QUEEN

Bronnie, 77, has been remembering the Coronation of Queen Elizabeth II.
She said: “I was eight years old when Queen Elizabeth II was crowned Queen.
“We lived on Kent Road in Blackpool and in our house we didn’t yet have a television as it was on order and hadn’t arrived. I can remember my grandma being very cross because she was going to miss the coronation.

“We ended up watching it at the Brockson’s corner shop. Mr Brockson took us through the front door of the house – a big novelty as we normally only saw the shop itself – and showed us into the lounge. We sat crossed legged in front of the television, and because I was one of the youngest, I got a seat right at the front.

“Watching the Queen on the television, I was in complete awe of all the soldiers in their uniforms with their shining helmets and medals. I had never seen anything like this before. I remember thinking how beautiful the Queen was and hoping that I would grow up to look just like her.
“For a young girl of eight the whole thing was like a fairytale. There will never be another like Queen Elizabeth II.”

Derek, 95, met the Queen while serving in the Navy.
He said: “I was part of the crew on HMS Vanguard in 1947 when the Royal family travelled to South Africa.

“We arrived in Cape Town, South Africa on 17th February 1947. While travelling over I can remember watching Princess Elizabeth playing rounders on board. I never joined in the games, but I enjoyed getting a glimpse of this side of the Royal family. I interacted and spoke with Princess Elizabeth on many occasions and remember how kind and gentle she was and how very approachable.”

“I was a heavy goods driver for the RAF at the time. We were told to expect her and that we were under instructions to keep a low profile.

“Several others and I stood peeping between the bowsers to try and catch a glimpse of her arrival. Queen Elizabeth II arrived on the airbase in a large shiny black car, and when she arrived all the Army and RAF personnel stood to attention as she passed.

“She was checking our RAF uniforms to make sure we had nothing out of place, and I can remember her being truly great and very lovely. She will be missed by so many people.”