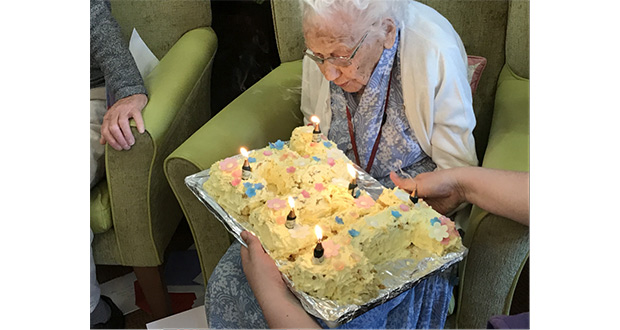 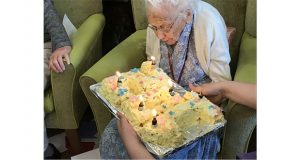 Dorothy Dyke, who likes to be known as May, has celebrated her 102nd birthday on 2nd May at her home, Foxgrove residential home on High Road East, Felixstowe.

May has lived in Felixstowe all of her life and is a well-known member of the local community.  She was one of ten children, and was born in Maidstone Road in Walton in 1917. She married Victor Cooper in the late 1930s and later had a daughter, Valerie. Victor, a carpenter, sadly died in the early 1940s. May then worked at the Walton Co-op for many years.

In the late 1950s she met a widower, Stanley Dyke, at Walton Church, and they married in 1959 and together ran Stanley’s draper’s shop on the corner of High Road West and Seaton Road. Stanley died over 30 years ago but May remains close to her stepchildren.

May has been an active member of her Church, the Mothers Union, the Gainsborough Club and the Tangent Club. She also regularly attended coffee mornings at the Church, the Hope Trust and the Friday market.

May has been living at Foxgrove since late 2016.

Magda Kurdziel, manager of Foxgrove said: “May has had a marvellous party for her 102nd birthday, with family and friends joining her for afternoon tea.  The kitchen staff baked her a huge ‘102’ cake, which was delicious and enjoyed by everyone, and May has been inundated with cards, flowers and gifts.  She was absolutely delighted to see her family and friends, as well as hear from family who live in Australia over the phone.  May is a real character in our home who is admired by everyone.  We are all so happy to have been able to help May celebrate her special day.”