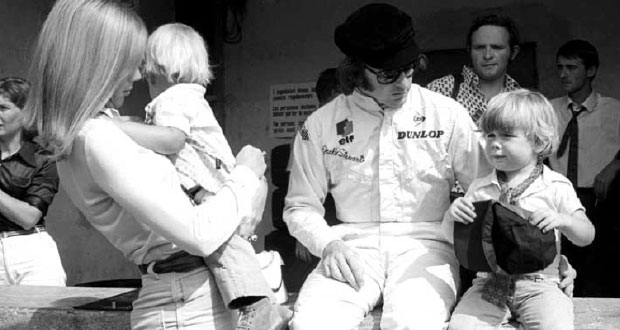 Speaking for the first time about his wife’s battle with frontotemporal dementia, Sir Jackie, aged 77, is in a race against time to help his wife, Lady Helen Stewart, as well as millions of others around the world affected by dementia.

“I have watched Helen change before my very eyes for the last two years. I of course, cannot comment on what it is like to personally have dementia, but I can talk about what it is like to live and love someone who, day by day, is determined to battle it.”

Lady Helen and Sir Jackie have been together for 54 years, and have two sons Mark and Paul and nine grandchildren. In 2000, Sir Jackie, Lady Helen and Paul all fought cancer, and now the family are fighting another battle with an illness over which they have no control.

“My wife was the original pit lane girl, my professional stopwatch – timing my laps to the millisecond. Her razor sharp mind was one of the things I immediately fell in love with, and it is her mind that is vanishing. Her short term memory is shot – she never remembers where I am even after I repeatedly tell her” Sir Jackie adds.

“That is where the frustration lies to be honest with you. It is so difficult to explain. I have in front of me my wife, my partner, who still has this feisty willpower but is not accepting that she has dementia. It is basically like having worthless determination. She knows there isn’t a cure, and that may be a reason why she doesn’t accept she has the illness, perhaps it makes everything a little more real?”

“This is where I step in. I have accepted that there may be nothing I can do to save my wife – even though I will do my damn hardest to do so – I am going to try and put an end to this global epidemic. I am now facing one of my biggest personal challenges of my life and will make sure that, whilst I am still on this Earth, I put all my efforts in finding a cure for this horrendous illness. I want to make sure I can do all I can to help millions of people around the world avoid this heartache.”

Supported by a team of eminent trustees including Edsel Ford II, David Mayhew CBE, Jean-Marc Huët, Sir Martin Sorrell and Dame Vivien Duffield, Race Against Dementia is aiming to raise millions of pounds from donations to fund global research into a cure. Just as F1 racing has established a strong track record in delivering accelerated innovation in the world of motorsport, Race Against Dementia aims to fund ground breaking and accelerated research into preventions and treatments that will ultimately cure dementia.

“Coming from an industry where pioneering engineering is at its best, I believe that by investing in innovative and collaborative research driven by the world’s most promising scientific talent, we will accelerate the identification and development of novel drugs with the potential to transform the lives of patients and their loved ones. Your donations will fund this ground- breaking research into new treatments so that together we can cure dementia. I hope that mine and my wife’s story encourages people around the world to join us in the ultimate race.”

“Sir Jackie’s vision is driven by pure determination and ultimately, love. Dementia has such a high prevalence globally and it is often thought of as an inevitable part of getting older but this is simply not the case – the condition is caused by brain diseases that we can slow or stop through research. Researchers are working extremely hard to find new treatments and we are delighted to be part of this unique and innovative approach to accelerate global resear