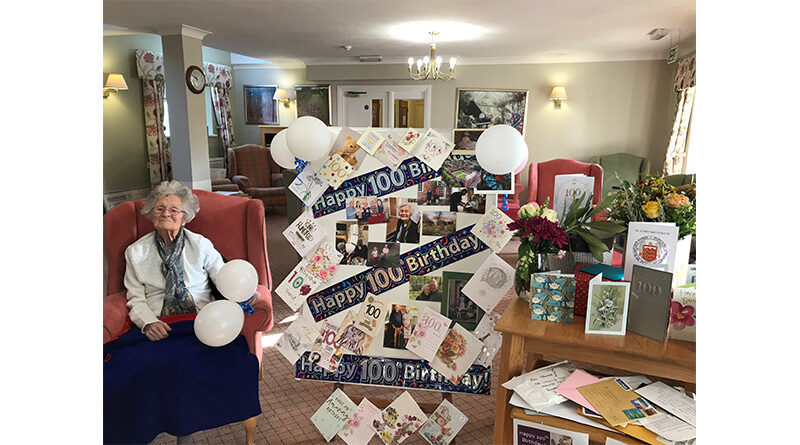 A Dorset resident who played her part in Second World War military intelligence has celebrated her 100th birthday at a Blandford care home.

Sylvia Spooner was the focus of international attention as family members and friends in the UK, Canada, Australia, The Gambia and the United States joined a Zoom call or sent greetings.

Born in Streatham, London in 1920, Sylvia, maiden name Blest, was in her late teens when she had a chilling foretaste of the looming trouble in store for the world.

Staying with an English lady and her husband, a German General, on an arranged stay in Bavaria, she found herself attending a Hitler rally in Munich and was later taken to visit Austria after its annexation by Nazi Germany.

Back in London and training as a secretary with German language skills, Sylvia was taken on by the MI5 section responsible for handling intelligence on threats to rail transport. Her first posting was at Wormwood Scrubs prison.

Her son Edward said: “She always used to say how she and the other secretaries had to be very careful not to let the doors of their offices close, because of course they were cells and couldn’t be opened from the inside.”

Near the start of the London Blitz which began on 7 September, 1940, and went on for 57 days and nights, Sylvia and her colleagues were moved to Blenheim Palace, birthplace of Winston Churchill. In their spare time they received art history lectures by Anthony Blunt, an MI5 employee later exposed as a Soviet spy, and skated on Capability Brown’s lake. Her office was in one of the cold wooden huts built in the Great Court. So she was one of the original “Blenheim Girls” who lived in Keble College, Oxford.

Sylvia transferred to Ghana on the west coast of Africa where she met and married a colonial officer from Dorset, Arthur Spooner, who was born in Coupar House, Blandford, and was one of the sixth generation of the family connected with Blandford.

They had two sons, Charles and Edward, who was born in Blandford Hospital.

Arthur continued working in Ghana, with further assignments in The Gambia and Nigeria, before the family stayed in Tarrant Gunville, near Blandford, from the early 1960s.

Asked for Sylvia’s secret of longevity, Edward said: “The most important aspect is that she has always been connected with people, helping everyone and anyone. Aside from that, plenty of exercise, including going up and down the village on her old bike, and keeping her mind active by reading.”

Having arranged the centenary Zoom call, team members at Whitecliffe House helped Sylvia open her cards, presented her with a homemade cake and invited all callers to sing Happy Birthday.

“It worked really well even though people were in different time zones around the world,” said Debbie Easter, the home’s Companionship Team Leader. “In Vancouver and Seattle it was 3:00 at night for example. Sylvia acknowledged all the greetings and the cards people sent, including her one from the Queen. Sylvia is a very bright lady and we were delighted to help her celebrate her 100th birthday with a party that involved her whole family and many friends.”