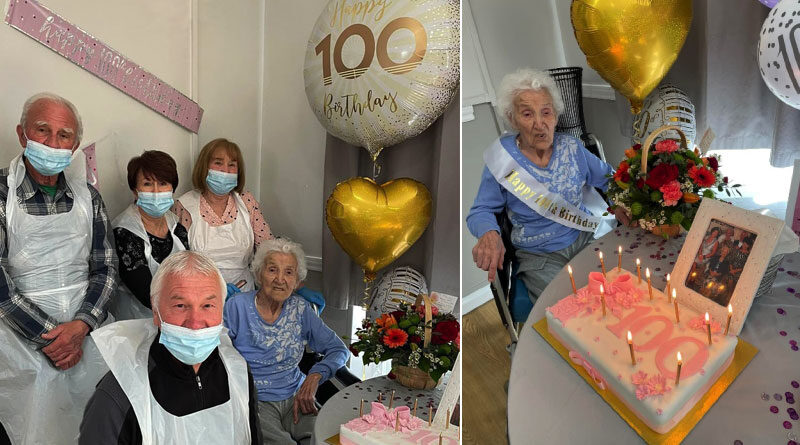 A resident at a Basildon care home has celebrated her 100th birthday.

Florence Ponti (Flo) marked the special occasion at Mundy House care home, on Church Road. She celebrated her birthday with a tea party surrounded by family, residents, and staff at the home.

Flo was born 1922, in Southwark, South London, she is one of six children. After leaving school she trained as a Court Dressmaker with Norman Hartnell, a British fashion designer who was best known for designing gowns for the royal family.

When World War 2 broke out Flo was called up to join the Women’s Auxiliary Air Force, where she worked across many different roles assisting in the war efforts. After the war she went back to her dress making roots working until she finally retired aged 75!

Flo met and married Joseph Ponti and went on to have four children, two boys and two girls. The family lived in Tufnell Park, North London before moving to Romford in the 50’s and then on to Basildon in 1964 where the family finally settled.

Sadly, Flo lost her husband in 2003 after a long and happy marriage. She now has 10 grandchildren and 11 great grandchildren, with two more on the way. Flo has lived her life to the full, surrounded by her ever-growing family.

Flo loves being out in the garden enjoying cross stitch and lots of embroidery. At aged 90 she joined a local art club where she gained another talent in water colours. In her later years she took to crosswords and word searches, she would rarely sit with nothing to do.

Flo said: “I was really looking forward to my 100th birthday and receiving a card from the Queen. I was so grateful for all the efforts the staff at the home went to for my birthday tea party.

“It was a lovely day and I enjoyed spending time with my family, where we spent the day reminiscing about my life and fond memories with them. I am very happy at Mundy house the staff look after me so well.”

Josi George, manager at the care home said: “Flo is a pleasure to be around, she really enjoys keeping herself busy and taking part in activities in the care home. We all had a lovely day celebrating her birthday with tea