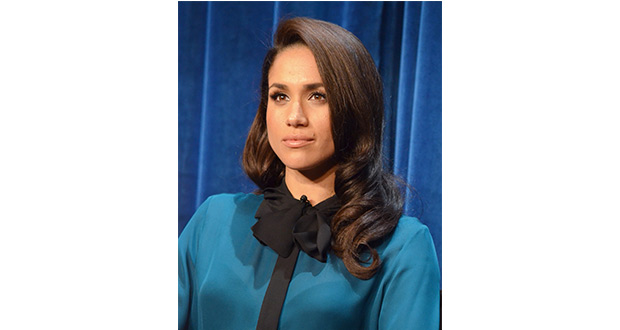 The Duchess of Sussex, Meghan Markle, spread some Christmas cheer to retired artists and entertainers when she visited the Royal Variety Charity’s residential nursing home in Twickenham.

She spent the morning talking to residents, singing carols and helping create a Christmas collage, showcasing her calligraphy skills, and demonstrated her grasp of foreign languages, chatting in fluent Spanish to one of the residents.

The charity’s care home supports 36 residents who are former entertainers and artists, with activities coordinator, Jay Crank, saying Meghan Markle had made them “feel truly uplifted”.

The Duchess, herself a former actress met ex-EastEnders actress Mona Hammond who played Blossom Jackson in BBC soap and Richard O’Sullivan – who was cast in the 1970s TV sitcom ‘Man About The House’.

Activities co-ordinator Jay Cranks said about the duchess: “She said she used to teach calligraphy. She was so natural, so wonderful to be with, she can join our class any time.”

Giles Cooper, chairman of the Royal Variety Charity, had taken the Duchess on her tour of the home and said the royal visit had made Christmas for the residents.

Mr Cooper said: “Obviously as an actress she felt amongst her own, I think.

“She was chatting all the way round, great fun in the hairdressing salon, in all the areas actually, really joined in and made a real effort to speak to absolutely everybody – it was fantastic to see.”

Meghan joined residents at Brinsworth House when they had a festive sing-a-long of carols led by West End singer Cassidy Janson.

She clapped her hands and swayed in time to the music and later chatted to Rosario Serrano, 87, a former Flamenco dancer and singer who was accompanying the music with a bangle made of bells.

Ms Serrano, originally from Madrid, said Meghan spoke to her in fluent Spanish without an accent. She added: “She was telling me about her life and her acting, she was talking about everything. She said she started doing a job she enjoyed then she met Harry.”

She spoke to retired West End theatre actress Josephine Gordon, who said: “I’ve been reading about you in the papers.” Meghan, smiling, looked down and patted her bump. “I’m feeling very pregnant,” she said. When Ms Gordon asked how she was feeling, the Duchess replied: “Very good.”