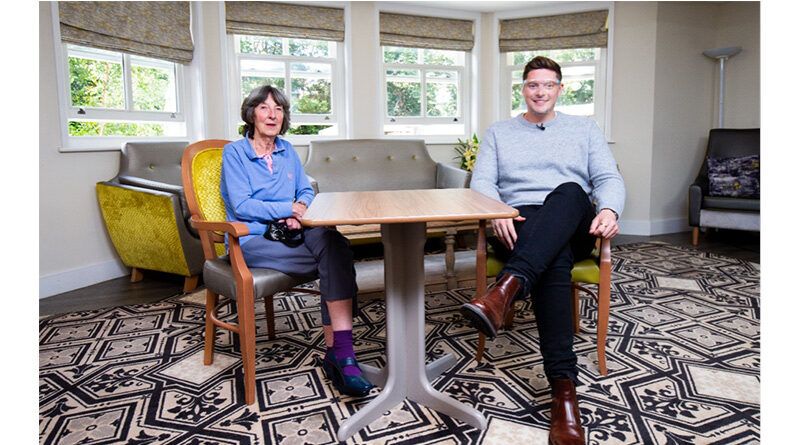 A care home has welcomed reality TV star and NHS doctor, Dr Alex George, to meet some of its residents, as he embarks on a campaign to push mental health awareness ahead of Mental Health Awareness Day which took place on 10th October.

As part of a partnership with KIND snacks for its Ment-all Health campaign, which seeks to encourage cross-generational conversation, Dr Alex spent time chatting to several residents at CHD Living’s Kingston Rehabilitation Centre.

With research by the snack brand revealing that almost a third of over 65s believe that the term mental health refers to mental illness, Dr Alex sat down to discuss their understanding of mental health and how it had affected them during their lives.

The doctor, who is the Government’s youth mental health ambassador, spoke to five different residents, who each have colourful and unique life experiences and had come to Kingston Rehabilitation Centre from several care homes within the CHD Living group.

As part of the conversation, they were asked to describe their interpretation of mental health, which revealed the residents tended to see it as a mental illness or disorder, rather than appreciating the current understanding – something that serves to underline the generational difference in thinking. When pressed for their own mental health experiences, the residents regarded it as something that wasn’t relevant to them, advising they’d “never experienced it” or had ever felt “particularly low”. In a nod to the resilient approach of older generations, Gay went on to say that in the past she has simply “never allowed herself the opportunity to be sad as it goes directly against her namesake”.

Some of the residents recounted stories of tougher times growing up in the war, but saw hard times as “something they were used to”, saying they “just got on with it”, going on to say that emotions and feelings were always “hush hush” and “certainly not something that was discussed within families”.

Dr Alex, physician and UK Youth Mental Health Ambassador, said: “The campaign has revealed a clear disparity between different generations, not only in their willingness to discuss how they’re feeling, but also in their ability to describe what mental health even means. The real concern is that if there’s a generation that doesn’t fully understand mental health, how can they recognise it in themselves and therefore ask for support. Therefore, this World Mental Health Day, KIND Snacks is calling on the nation to show kindness to older relatives, neighbours, and community members, by simple starting a conversation. Because mental health affects people of all ages, and that one conversation could have more of an impact that you realise.”

Speaking of his meeting with the residents, Dr Alex said: “It was amazing to speak with the residents. It’s awesome to hear some stories – some really sad stuff, some happy stuff making us laugh. It’s just fantastic to hear what their experiences are around mental health and what they think of mental health.”

Shaleeza Hasham, CEO of Adopt a Grandparent and Head of Communications at CHD Living, said: “We were delighted to welcome Dr Alex to the home and we’re excited to support KIND’s mission to get different generations talking – something that’s underlined in our own Adopt a Grandparent campaign, which seeks to create intergenerational friendships.”

Shaleeza continued: “Past interpretations of mental health vary to that of the present day with a ‘stiff upper lip’ often seen as the go to response. Of course, our understanding of it is certainly evolving for the better, but it’s a perception that’s still deep-rooted in many older generations – and it’s an ongoing process to encourage them to open up. The mental wellbeing of our residents has always been a priority for us at CHD Living and we see first-hand every day how small measures like kindness, compassion and conversations can make a real difference to people’s happiness. Mental health is just as important in older age as it is at any time of life, and sharing personal stories can make a huge difference.”

You can watch a video of Dr Alex meeting the residents, here: