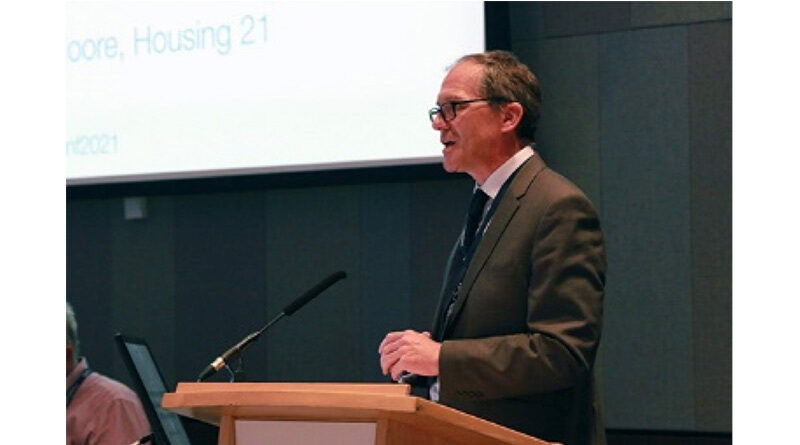 Housing must better meet the diverse needs of older people living with dementia, as well as those from LGBT+ and BAME backgrounds – social care and housing sector experts heard Wednesday 6 October.

Extra care and retirement housing provider Housing 21’s annual conference, at the International Convention Centre (ICC), Birmingham, asked, “Is housing responding to the diverse needs of older people?” It saw leaders from Stonewall, to Birmingham City Council, Sheffield Hallam University and University of Worcester address the issue, housing associations, architects and other organisations from across the sector.

Keynote Lord Richard Best OBE, co-chair of the All-Party Parliamentary Group (APPG) on Housing and Care for Older People and Affordable Housing Commission chair, estimated a huge 100k of the 300k new homes target from government would need to be provided for this age group.

“It’s vitally important to reach out to minority groups and the big housing associations have the power to use their influence for good in the sector, reaching into communities and changing the way we provide housing for older people.”

The conference outlined how to co-produce cohousing for deprived inner-city communities with a high proportion of BAME populations, as well as how housing can meet the needs of LGBT+ residents and challenges their communities face. The event also lifted the lid on whether there has been enough recent progress in the housing and care offering for people living with dementia.

“As providers, we can no longer assume what people want – and build it – but instead, listen and engage to co-produce. By asking different communities what they want and working with them, they get peace of mind, safety and security and it means as providers we can prevent problems which can cause real distress, such as loss of dignity, lack of space, disrespect and antisocial behaviour.

“Inclusivity has to be our goal, because our current and future generations of residents are asking for more – more distinction in the retirement and extra care homes they choose and a better quality of life in the communities in which they live.”

Stonewall Housing director of education and engagement, Tina Wathern, reiterated results from the 2018 HouseProud ‘There’s no place like home’ research, revealing just one per cent of more than 600 LGBT people surveyed said they would consider a general needs housing scheme. Putting this in context, up to 75 per cent of older LGBT people live on their own in later life, while 33 per cent of those surveyed had experienced homo-, bi- or trans- phobia from carers.

“An organisation needs to come out before its customers will – you can’t have true equality if you don’t recognise diversity. Older people have a greater reliance on healthcare, yet statistics for older people’s sexual orientation are not gathered – the fact is there is just not enough recognition and adaptation to support their needs properly.”

How cohousing can work for BAME communities was discussed by Triangle Architects, the UK Cohousing Network and Birmingham City Council, among others.

Councillor Shabrana Hussain presented a partnership between the Council and Housing 21 to deliver communities in deprived inner-city areas in Birmingham and the wider West Midlands. She reiterated the importance of working with on-the-ground organisations to engage with communities in co-design and establish optimum development size and internal layouts.

“To begin to reverse the massive tide of inequality, housing has to align with where people want to live. People want to belong, feel welcome, safe, free and secure and this can only be achieved by collaborating with communities with experience – yet often no influence.”