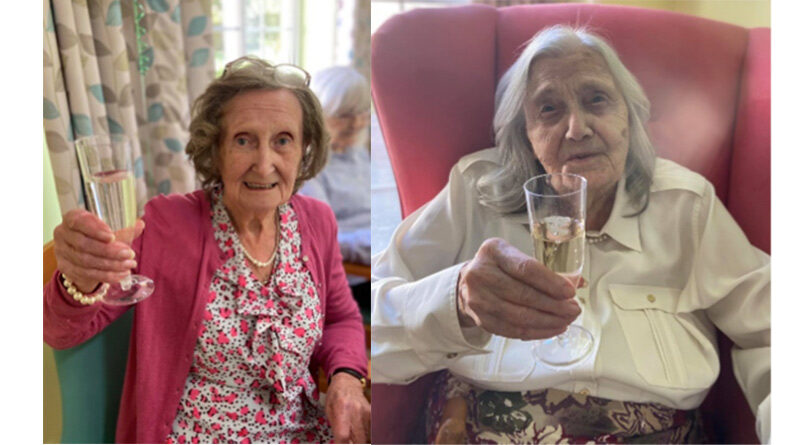 There were double celebrations at Winchester’s Tegfield House Care Home in when two of its residents enjoyed their 100th and 90th birthdays on the same day.

Iris Humphrey, one of the longest-staying and most loved residents at Tegfield House in Chilbolton Avenue, celebrated her 100th birthday with Rita Goldsmith, who turned 90 the same day.

Iris, who came to Tegfield House in October 2011, was born in London, Iris remembers how she used to waltz the night away in Soho until she was called up for military service during World War 2 in the Auxiliary Territorial Service (ATS), the women’s branch of the British Army in which she was promoted to Corporal.

She worked in the payroll department, ensuring the wages of the brave soldiers were paid. It was there where she met her husband Rex and they married in 1946. They started their married life in Eridge near Tonbridge Wells in Kent but paying frequent visits to London to enjoy gatherings with the extended family.

Iris settled into married life, taking care of Rex, chickens and occasionally pigs, honing her skills as an excellent baker. To this day, her family members praise her cakes as the finest ever. She was also a keen gardener and took immense pride in her flowers, often shopping for special plants.

She and Rex moved to Winchester 47 years due to his employment with Scats country store. They settled here with their two dogs, Chum the spaniel and Toss the collie, entertaining friends and family with her wonderful meals.

Iris enjoys a close relationship with her niece Ann and her husband John.

Rita, who came to Tegfield in December last year, is the matriarch of a huge family and spent much of her life raising her five boys. She keeps in regular contact with all her grandchildren via a WhatsApp group and knows her way around an iPad for daily FaceTime chats with her loved ones.

Both ladies were treated to a pamper on the morning of their birthdays in preparation for garden visits from two members of their families.

For their party, Tegfield House’s dining room was decorated in green and pink to reflect their favourite colours. Both ladies arrived simultaneously to rousing applause and Handel’s The Arrival of the Queen of Sheba playing softly in the background.

Deputy Manager Jacqui Standing gave an emotional and at times humorous speech to both ladies, while a huge birthday cake and buffet was prepared in their honour.