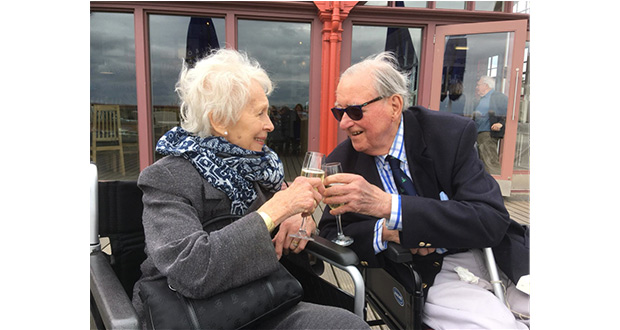 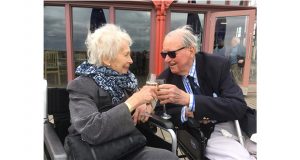 An Edinburgh couple are perfectly placed to give lessons in love this Valentine’s Day – as it will be the 61st time they celebrate February 14th together.

And Douglas Bell, 93, and wife Olive, 88, believe they can give couples of all ages some simple tips for a long and successful marriage: don’t worry, be happy.

The doting pair is celebrating this Valentine’s Day at Edinburgh’s finest care home, Cramond Residence, where they have both lived since October 2018.

Douglas and Olive first set eyes on each other in 1958 when Douglas, a General Practitioner was called out to a local care home. He had tickets for the Scotland rugby match that day, so was annoyed to be called out last minute and have to miss the game!

However, when he arrived, he met the Deputy Matron, Olive, who didn’t give him the warmest of greetings. Undeterred, Douglas attempted to cheer her up by telling her jokes and offering her a bag of Jelly Babies. At the time, he had recently leased a cottage in Peebles, and needed some help with the decorating. He asked Olive if she would help him, and luckily she agreed.

A few months later, Douglas took Olive to a local rugby match to make up for the one he had missed, where he got down on one knee and proposed. They were married in May 1958 and have been inseparable ever since. They say that the key to a successful marriage is to try not to worry so much, and focus on being happy with one another. They have three children together, Susan, Rosalind, and Alison. Douglas also has two children from a previous marriage, Caroline and Colin. Together, they have 10 grandchildren.

Eileen Gray, General Manager of Cramond Residence, said: “Douglas and Olive were Cramond Residence’s first residents, and it’s so wonderful to see them together. They enjoy having company and have many visitors – both family and friends.

“They are still very much devoted to each other. Douglas is very attentive and is always taking care of Olive. We hope they continue to enjoy a happy life together in their new home.

“It’s lovely to have such a real example of true love with us at the home on Valentine’s Day.”