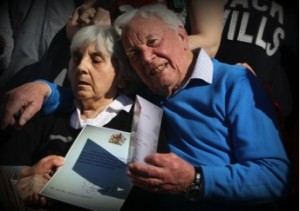 A couple at Skelmersdale’s Stocks Hall Care Home celebrated 60 years of being happily married with a celebration at the home.

Doug Appleton (89) born in St Helens and Betty Appleton (81) born in Knowsley celebrated the milestone anniversary at the home with their family and friends.

The diamond anniversary couple, Doug, a retired Headteacher and Betty, a retired teacher, met at Keswick Rugby Ground 62 years ago when Doug was playing rugby for St Helens Old Boys and Betty was playing hockey for St Katherine’s Teacher Training College, in Keswick.  As both matches finished, Doug saw Betty and said to his best friend “I’m going to marry that girl” laughing, “She’s got dirty knees”.  One year later Doug and Betty got engaged, one year later they were married at Knowsley on April 7th 1955.  Doug’s best friend, who was with them when they met, was best man at the wedding.

Betty has lived at Stocks Hall, Skelmersdale for over four years and doting husband Doug has visited her everyday…saying “because she’s mine”.

The couple attribute their long and happy marriage to a supportive family and having many interests.

Doug Appleton said: “We would like to say a big thank you to the home for organising the celebration and thank you to all our family and friends who made our day extra special.”

The couple also received an official telegram from the Queen, in recognition of the anniversary milestone.

Both Doug and Betty also have birthday celebrations next week, Doug who turns 90 and Betty, 82.  In celebration of his 90th birthday all the family are travelling up to Carlisle airport to celebrate and watch Doug fly in a Gyrocopter where he will fly over the rugby field where they met 62 years ago.

Sue King, Manager of Stocks Hall, Skelmersdale, said: “It’s not every day that a couple celebrate such a significant anniversary.  It was fantastic to be part of Doug and Betty’s special day and lovely to see how happy they were surrounded by their family and friends