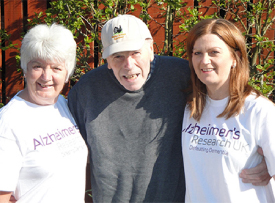 Alison Blaikie, from Elrick in Aberdeenshire, has been made a Champion of Alzheimer’s Research UK in recognition of her exceptional support of the charity. Alison began supporting the UK’s leading dementia research charity after her late dad, William Kennedy, was diagnosed with Alzheimer’s disease. She joins a small but growing group of 28 Champions – supporters who have gone above and beyond to help Alzheimer’s Research UK in its mission to defeat dementia.

When William lost his eight-year battle with Alzheimer’s in 2012, aged 78, he no longer recognised Alison or his wife, Anne. His death came just weeks after Alison arranged a 20-mile trek across the Scottish hills, with family and friends, in a determined effort to boost funds for pioneering research into Alzheimer’s disease. Since then, as a tribute to her dad, she has gone on to raise thousands of pounds for Alzheimer’s Research UK with further challenging Highland walks.

Alison, 45, works as an administrator for an oilfield services company in Aberdeen. She explained her motivation for supporting the charity:

“Before Dad was diagnosed with Alzheimer’s I had no idea that there weren’t any treatments to stop this devastating disease in its tracks. It came as a shock to learn that it’s an area of research where funds are lacking. It’s made me determined to do everything I can to raise awareness and money to help Alzheimer’s Research UK find the treatments so urgently needed.

“Dad was a joiner and worked hard all his life. He’d looked forward to retiring and having time to relax with Mum, enjoy his golf and travelling. But those dreams were soon shattered and he gradually became a shadow of the man he used to be – the shadow of my lovely Dad. Mum cared for him at home but it put a huge strain on her. My sister, Caroline, and I did what we could to help but little by little he lost the ability to do anything for himself. He couldn’t button his shirt or clean his teeth – caring for him became a 24-hour job.

“It was heartbreaking when we realised he didn’t recognise us anymore. He couldn’t communicate very well in the end. But sometimes he would surprise us and come out with the odd phrase or suddenly burst into song – those were wonderful moments. Although it’s too late for Dad, I would dearly love to see preventions and treatments found to stop other families going through the same as us. Research is the only answer and I’m proud to be doing something positive to help and honoured to be made a Champion of Alzheimer’s Research UK.”

“We are delighted to make Alison a Champion of Alzheimer’s Research UK – she is such a determined supporter of the charity and truly deserves this honour. In addition to raising thousands of pounds for our pioneering research, she is always willing to share her story with the media in order to increase public understanding of Alzheimer’s disease and other forms of dementia.

“There are over 66,000 people in Scotland living with dementia today, including over 3,000 people in Aberdeenshire. Dementia poses one of the greatest threats to public health now and in the future but funding for research still lags far behind other serious diseases. We rely on public donations to fund our crucial research and it’s thanks to the commitment of people like Alison that we are able to continue our vital work.”