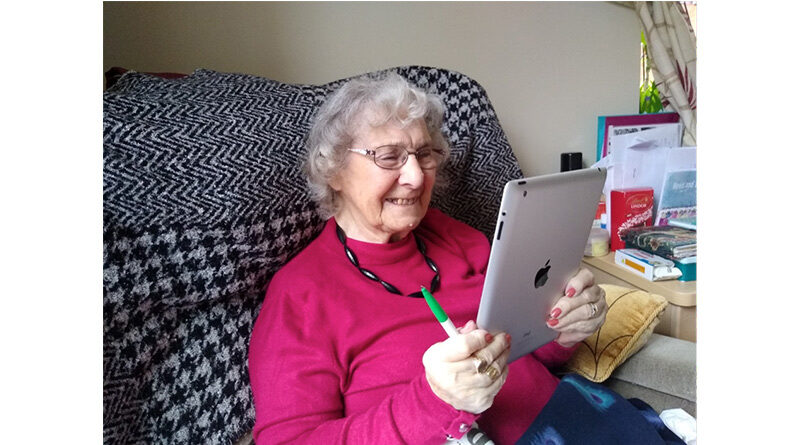 Residents at HC-One’s Market Lavington care home, in Wiltshire, have had the opportunity of building up relationships with the local junior school through video calls this week.

A few weeks ago, during the promotion of ‘Intergenerational Week’, Wellbeing Coordinator, Riaz Ali, contacted the headteacher, Lindsey Clough, at St Barnabus, the local junior school, with the idea of video calls to be set up between their children and the Residents.

Yesterday this was finally achieved and a fun-packed hour was spent with three year 6 children and several Residents, including Angela and June (pictured) at Market Lavington. The children were utterly delightful, asking questions about favourite foods and favourite places to go. At one point they held up a whiteboard and suggested games of hangman or noughts and crosses with the Residents.

The feedback from St Barnabus was extremely positive with the class teacher, Liz Orr, stating the children loved it so much, it filled them with confidence, and the school would like to make this a regular weekly meeting.

The Residents were full of positive comments too, with one remarking, “It was such a lovely experience, I would like to do it again!”

Another Resident added, “They were so funny, but I think they let me win at noughts and crosses!”

Lindsey Clough said “There were some children a little hesitant at first to be involved and were sitting at the back of the class watching the others take part in the conversations. After it ended, those other children were asking to be signed up for the next video chat session – we now have a waiting list of children eager to chat to the Residents of our local HC-One home!”

Riaz commented, “The opportunity of talking to children of that age, was something the Residents relished and were very aware of. They loved hearing about the children’s favourite lessons, and their likes and dislikes in general!”

“I am so grateful and thankful to St Barnabus and the teachers and headteacher for making this possible, and I am so glad it was a success and that we have future meetings to look forward to!”