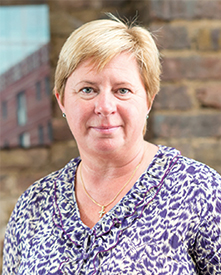 Chris Elsley, from Croydon, near Royston, has been made a Champion of Alzheimer’s Research UK, the UK’s leading dementia research charity, based in Great Abington. Chris has been given this title in recognition of her exceptional support of the charity by raising money and increasing public awareness of Alzheimer’s disease and other forms of dementia. She joins a small but growing group of 28 Champions – supporters who have gone above and beyond to help Alzheimer’s Research UK in its mission to defeat dementia.

Having worked in the health and care sector for eight years, Chris is a Dementia Services Manager for CHS Group in Cambridge. She also runs her own dementia training business, Forget-Me-Not, for families and professionals.

“When I joined the care community, it wasn’t long before I came across people living with dementia. I must admit that I didn’t know very much about it then. I soon realised that some people living with this condition weren’t always getting the right care or stimulation and it’s become a passion of mine to ensure they do.

“It’s also opened my eyes to the lack of funding for research to find better forms of diagnosis and the treatments so urgently needed. That’s why I’m determined to do everything I can to raise money and awareness to help the experts, Alzheimer’s Research UK.

“Until the research breakthroughs come, it’s important to ensure people with dementia are treated with dignity and compassion. As well as training professionals, I spend a lot of time with families who are trying to understand and care for the person they love, and I provide advice on ways to cope and make life easier.

“But sadly, all the love and care in the world won’t stop dementia in its tracks. Research is the only answer and I’m proud to be doing something positive to help Alzheimer’s Research UK and honoured to be made a Champion of the charity.”

“We are delighted to make Chris a Champion of Alzheimer’s Research UK – she is unwavering in her support of the charity and truly deserves this honour. In addition to raising money for our pioneering research, she is always willing to speak out at public events and with the media in order to increase public understanding of Alzheimer’s disease and other forms of dementia.

“There are over 830,000 people in the UK living with dementia today, including more than 82,000 people in the East of England. Dementia poses one of the greatest threats to public health now and in the future but funding for research still lags far behind other serious diseases. We rely on public donations to fund our world-class research and it’s thanks to the commitment of people like Chris that we are able to continue our vital work.”