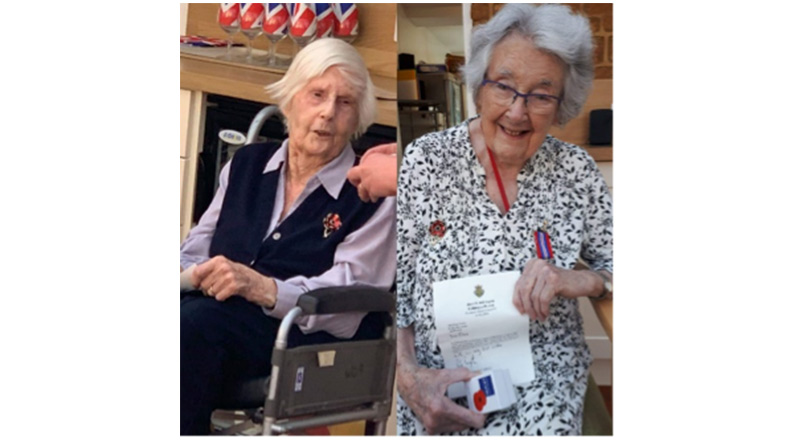 Edna Sewell, 95, and Margery Hawes, 97, were presented with the brooches by Deddington’s Royal British Legion on 8 May.

Edna was trained as a Writer in the Navy for three years, where she worked on signal books for convoys. When the news came through about VE Day, Edna was trying to get to Bury as she was due to be married two days later but had trouble because of all the celebrations and got stuck at Euston station. Once the crowds had dispersed, she could then continue her journey to Bury to get married.

Margery volunteered to join the WRAF and was in active service for five years. During her time in the Forces she was a plotter then a sergeant, and she was also required to sign the Official Secret Act. Marjorie was in Belgium when VE Day was announced and she remembers lots of dancing in the street and everyone being very excited because the end had come.

Edna said: “My time in the forces was enjoyable, we were all young, so we got on well. I made some great friends. I feel very proud to receive this accolade for my service.”

Margery said: “I loved my time serving in the WRAF and I met lots of different people. My role was very interesting, and I also enjoyed the marching!

“I’m very grateful to receive one of these brooches, thank you.”

Commander Robert Forsyth RN (Ret’d), Chairman of the British Legion Deddington Branch, said: ““The Special Edition RBL VE75 Brooches have been presented to the four residents of Deddington who served in WWII, two of those who live at Featherton House.

“We all have great admiration and respect for their contribution to securing peace in Europe those many years ago. They should wear their brooches with great pride.

“Two other ladies, who are not residents of Featherton House, and who received a brooch were Daphne Canning (WAAF) and Stephanie Higham (WRNS).”