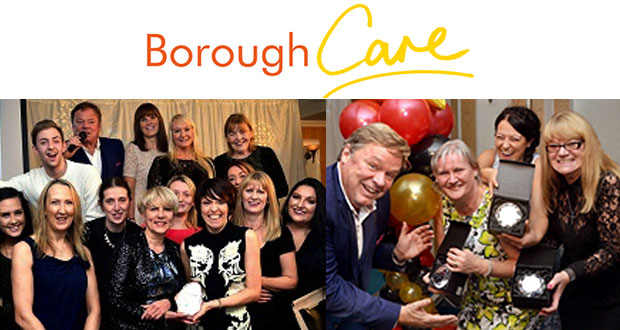 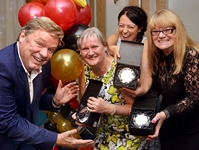 Comedian and Coronation Street actor Ted Robbins delivered a genuinely heart felt thank you to Borough Care’s dedicated professionals when he presented the trophies at the company’s annual awards night.

Flying down the motorway to Edgeley Park after turning on the Christmas lights in Blackburn, the 60 year-old funny man joked about how he himself had died for 15 minutes.

It happened just nine months ago at Phoenix Night’s nostalgia event when he collapsed on stage only to be brought back to life by two doctors in his audience and then cared for night and day by his ‘beloved’ care workers.

Ted, whose own heart stopping moment was caused by the same ventricular fibrillation suffered by Fabrice Muamba, said: “In my early days I was a student nurse and I remember my mentor saying to me, ‘Some days you will have to do things you really don’t want to do and you will think to yourself why me? Why have I chosen to do this? But just remember that could be be your mother, your father, your nana your granddad and then think again.’”

“My period in hospital made me remember those words all over again. I had 12 broken ribs and a cracked sternum after two wonderful doctors in the audience had restarted my heart and I wasn’t feeling my best and I remember this absolute and utter angel called Anne who said “Do you want a bath Ted? And I can’t thank her and those like her enough. All of you in the room tonight who do those thankless but incredibly important tasks for the rest of society. You’re just wonderful.”

Ted is pictured with some of top award winners from the Stockport’s largest care provider with 11 residential care homes across the town specialising in providing quality independent living for those with dementia.

On his left is Rosaleen Charles who won Borough Care’s Leader of the Year for her work at the Meadway Court in Bramhall where she has assessed and improved environmental needs, introduced a more personal style of care tailored to individual needs and initiated projects such as a pie and a pint night and an in-house tea shop to bring back happy times.

Ros said: “I love every single minute of my work. Every day is different in dementia care and it is so important to help the most vulnerable. As a leader you should never ask someone to do something you wouldn’t do yourself. Sometimes you need to be firm but much importantly staff need a pat on the back.”

Next to her is Amy Bowler, who won Borough Care’s Newcomer of the Year joining Meadway in August. Amy said: “I used to work in an office and it’s so much more enjoyable. I love getting to know the residents, listening to their stories and helping their families.”

Next in line is the Carer of the Year, Judith Knowles, who jointly won Borough Care’s blue ribbon award alongside Louis Pierrepoint from Bruce Lodge in Offerton but could not be present on the night. Judith is in her second stint with Borough Care and has been working at Shepley House in Hazel Grove for seven years. Mother to two and grandmother to three, Judith said: “I am just part of a great team and have had great mentors. I love my work and yes you do need a sense of humour and patience but that comes with the job.”

The Care Home of the Year went to Marbury House in Reddish, Borough Care’s Intermediate Care Centre, in Hazel Grove which works in partnership with health colleagues to provide a place for active recuperation when people have been discharged from hospital.

Borough Care Chief Executive Kathryn Farmer said: “We would like to thank Ted for his genuine show of support but I am sure he will agree, more importantly, we would like to thank everyone of our 550 staff who give so much 24 hours a day and without whom the community would be much poorer.”