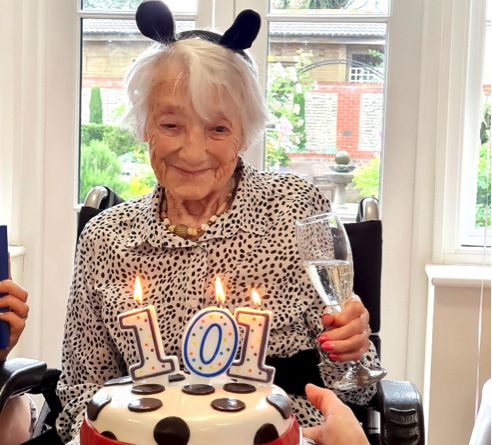 A Chichester care home resident has celebrated her 101st birthday with a 101 Dalmatians-themed party.

Dog-lover Kit Downing was the star of the show as Colten Care’s Wellington Grange enjoyed a black and white makeover for the occasion.

Wearing a spotted blouse and dog-ear headband, Kit first of all welcomed daughter Ann Davis and granddaughter Emma Stokes for a private get-together in her room.

The three were then invited to join staff and fellow residents in the home’s Market Cross sitting room for a surprise afternoon of canine-inspired fun.

Amid bunting and 101 black and white paw print balloons, guests toasted Kit with glasses of bubbly and tucked into a home-baked cake decorated Dalmatian-style with black spots and red collar.

There was even a special guest appearance by Alfie, another resident’s dog, sporting a Dalmatian-designed coat over his fluffy white hair.

Heather Pearce, Companionship team member at Wellington Grange, who wore a homemade white T-shirt with black dots, said: “Kit loves animals of all kinds but especially dogs. Given her 101st birthday, the theme of 101 Dalmations fitted really well. There’s also the new Cruella film based around the original, much-loved Disney animation, so it was timely.

“We did wonder where we could get hold of a real Dalmatian to make an appearance but Alfie came up trumps. At least he’s the right species, if not the right breed. Kit was all smiles when she saw him make his grand entrance posing as a Dalmatian. She thought it was hilarious that he was dressed up and was delighted to have a cuddle with him.”

For Ann and Emma, the party had particular significance. For her 100th birthday last year, Kit could only speak to them through a Perspex screen because of the tighter lockdown visiting rules in force then.

Seeing her mother a year on without the use of a screen was a joy for Ann, who added: “The 101 Dalmatians theme was stunning and we all had a special day. It was so good to join mum and the other residents, and the staff were all so kind and went to such a huge amount of trouble to stage the party. We thank everyone involved.”

Kate Goldie, Senior Carer at Wellington Grange, said: “It was an honour and privilege to help Kit celebrate her 101st birthday and sing Happy Birthday to her in person. She and the other residents who attended all had an amazing time, enjoying a party atmosphere that was happy and relaxed. It was a very special day to be remembered by all.”