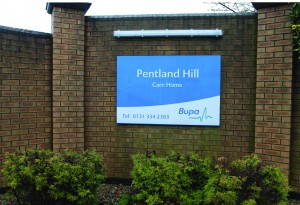 A nurse who worked with dementia patients has praised the work of staff and managers who have turned around a care home that was criticised by watchdogs.

Dorothy McPartlin, whose 93-year-old mother is a resident in the Pentland Hill Care Home in Edinburgh, says she is relieved by the transformation at the home.

Now she has called for the efforts of the new team to be recognised, to allow the many changes to properly take root so the care service can continue to improve.

Mrs McPartlin, who spent eight years as a nurse caring for people with dementia with the NHS until her retirement, said: “I have never been shy about complaining and demanding change and there is no doubt things were pretty poor for a while.

“However, I will also give praise where it is due and I really believe that is what is called for now. There has been a remarkable change at Pentland Hill and the care staff have worked incredibly hard. It is time that was recognised. There was a time for all the endless negative criticism, but it is a different place now, with different management and many new staff.

“Now it needs to be given a chance for all of those changes to take root properly, to make sure the improvements are for the long term and the home keeps getting better.

“If the staff hear nothing but criticism for what went on there in the past and nothing about the good work they are doing now, my worry is they will become demoralised and leave, then we’ll be back at square one again.”

Mrs McPartlin’s mother, who has six grandchildren and two great grandkids, was diagnosed with dementia seven years ago. Thanks to her nursing experience, her daughter spotted the early warning signs. The progressive illness affected her mother’s ability to speak, robbed her of her memory and eventually left her needing 24 hour care.

For a time her granddaughter moved into her home to help look after her, but when it became evident she needed round the clock attention, the family decided to seek a nursing home place.

Mrs McPartlin added: “I think any family would rather keep their mum and dad in the family home, but we simply couldn’t be there 24-hours a day and we had to be realistic. It is a very painful thing to do, but my mother’s needs made the decision for us.”

With a council-funded care package, the family secured a place at Pentland Hill in November 2011.  Later, once her mother was well-settled into one of the two dementia units at the home, Mrs McPartlin said she started to notice problems.

These included a lack of suitable activities, and feeling that there were too few staff to deal with the numbers of residents. She said most of the care assistants were dedicated and well-intentioned, but were failed by poor management and a lack of proper training – all of which contributed to a chaotic atmosphere and low morale.

She added: “There were times when I was unhappy with what I was witnessing, particularly with my background in dementia nursing. I complained consistently. When the Care Inspectorate gave the home a low grading I wasn’t surprised at all. In fact I was relieved that someone else with real influence was acknowledging that there had to be change.”

Mrs McPartlin says the formal Improvement Notice issued to the home brought exactly the right response from Bupa, which operates the home and has appointed an entirely new management team who are showing clear leadership and a commitment to training.

She added: “Huge changes have taken place and the atmosphere is completely different. The care staff say they are now getting the chance to spend much more quality time with residents. The staff are happy, the residents are happy. The changes I have seen are remarkable, particularly in the range of activities for residents.

“The new home manager is very proactive, while the new unit manager is very approachable and I feel confident that I am being listened to and my comments are being taken on board.”

She also praised the home for introducing “Maps of Life” for each resident, where the activity coordinators in the unit are challenged to produce a visual guide using text, drawings and photos to tell the story of each person’s life and achievements. That means existing carers get to know more about the residents, while new staff get a far greater insight into who the person was before dementia took its toll.

She added: “It is absolutely wonderful and they deserve an awful lot of praise for that. It means that the staff can really get an insight into the person and can make a connection and can always have a conversation point, which is so important when dealing with people who have dementia.

“Ideally things would never have got to the point they did at Pentland Hill, but there have been huge changes for the better and the new management and the staff have worked very, very hard. It is important that we now start looking forward and not continually raking over the past.”

Kirsty Dace, Bupa’s director in Scotland, appointed the turnaround team at the care home and has led the process.

She said: “The management has been completely replaced and we’ve introduced sweeping changes across all aspects of the home. We can now say with confidence this is a safe and well-run care home.

“It is extremely gratifying to hear that the efforts and hard work of the team have been recognised by Mrs McPartlin and other relatives, as well as by our residents. We will continue to work with them closely and are determined to keep improving.”