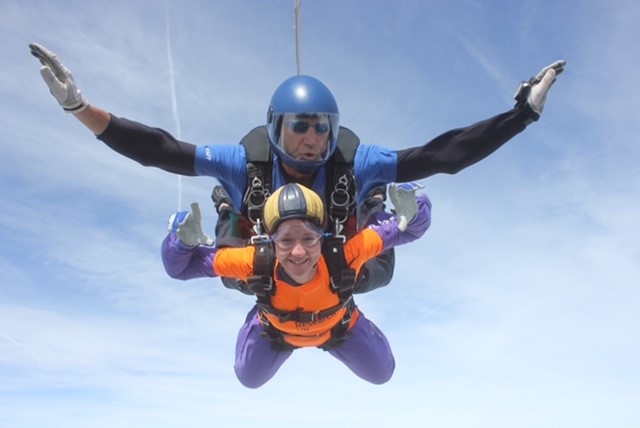 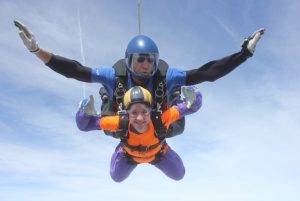 A daring fundraiser from The Perfume Shop’s High Wycombe store has overcome her fear of heights and flying to take part in a tandem skydive for Alzheimer’s Research UK.

Nicola Moore jumped from a dizzying 13,000ft as part of the charity’s Skydive Day, and was spurred on by thoughts of her nan, who died from Alzheimer’s disease last year. The Store Manager has so far raised over £1,000 from the challenge to support pioneering dementia research.

Nicola, who lives in High Wycombe, was one of dozens of skydivers to take the plunge for Alzheimer’s Research UK’s Skydive Day this month, with people taking part at various locations across the country. The challenge is one of a series of fundraising events being taken on by staff at The Perfume Shop, after Alzheimer’s Research UK was selected as their charity partner. To celebrate the retailer’s 25th birthday, the fundraising is also being supported by an in-store ’25p/25c ask’ at stores across the UK and Ireland, with customers given the option to donate 25p or 25c to the charity when they check out.

Nicola knows only too well how devastating the impact of dementia can be, having seen her beloved nan slowly decline as Alzheimer’s took hold. She passed away in March last year, following an eight-year battle with the disease.

Nicola was originally scheduled to take on the challenge on 6 May, but bad weather meant the jump was postponed, giving her two more weeks of nervous build-up before she could take the plunge on 21 May. She said:

“It took me a while to pluck up the courage to sign up for the Skydive Day, but I knew if I was going to do a fundraising challenge and ask people to donate their hard-earned money, I had to take on something that would be difficult for me. I hate heights, and I really hate flying, so this certainly fit the bill! My family said I was crazy but after speaking to a few people who’d done it before, I decided to sign up.

“As the day of the jump got closer I felt quite emotional – it brought back all the memories of my nan. My grandparents practically brought me up, they only lived seven doors away from us so we were always at their house and nan and I were very close. Before her diagnosis, I’d never known anyone with dementia before and I had no idea what to expect, but as her symptoms got worse I felt really helpless. With something like cancer, you see people going in and out of hospital for treatment but there’s nothing like that for Alzheimer’s. I still remember the day we were having a conversation and she said to me “Who are you, then?” – it was devastating. It was incredibly hard seeing the strain on my grandad, who’d never been without her, as he tried to do everything for her. She passed away just a couple of months before their 60th wedding anniversary.

“It’s such a cruel disease, and it’s made me really passionate about raising money for Alzheimer’s Research UK because I would do anything to stop other families going through this. I was really nervous about this challenge beforehand, but in the end it was an amazing experience and once the parachute opened, it felt really peaceful and I had time to reflect on why I was doing it. I’m so pleased I’ve done it, and the support I’ve had from colleagues and friends has been brilliant. As I’ve been making the 25p ask in store it often sparks a conversation with customers – lots of people can relate to this experience, and it just brings home how important it is to support this cause.”

Kate Moss, Corporate Partnerships Officer at Alzheimer’s Research UK, said:
“What an amazing challenge! We couldn’t be more grateful to Nicola for braving these heights and backing our vital research. The money raised by Nicola and her colleagues at The Perfume Shop is helping to fund essential resources and equipment for our scientists, and taking us closer to the next breakthrough. We rely on the support of the public to be able to fund our research, and it’s thanks to people like Nicola and companies like The Perfume Shop that we’re able to continue our work.”

To add to Nicola’s fundraising total, visit http://uk.virginmoneygiving.com/NicolaMoore14. To sign up for Alzheimer’s Research UK’s next Skydive Day on 23 September, visit www.alzheimersresearchuk.org/fundraising/skydive.