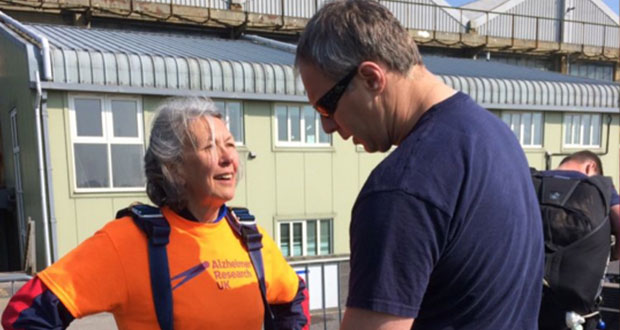 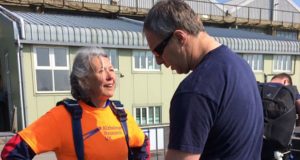 Determined fundraiser Vicki Graham conquered her nerves and leapt out of a plane at the weekend in memory of her husband Jamie, raising more than £7,000 for dementia research.

The 70-year-old from Dauntsey had geared up for her nerve-wracking skydive on Saturday, however due to constant low cloud she was unable to complete the challenge.

The bad weather failed to deter her and she took the plunge the following day and won’t forget the exhilarating experience.

She was one of 59 skydivers who pledged to raise money for the UK’s leading dementia research charity, at one of a number of locations across the country at the weekend.

Vicki took the skies above Netheravon Airfield in Salisbury and aided by a professional skydiver she jumped from a plane at 13,000ft.

“It was really testing for all of us to have to wait the whole day for the (wall to wall) cloud to lift and there were those who were unable to come back the next day as they lived too far away – I could tell from my fellow ARUK supporters that they too were conquering major fears, even though we had excellent professional and encouraging help from the Army Parachute Association, each one had a very special loved one for whom they wanted to raise funds into vital research.  Everyone has a different journey but the same goal.”

The skydive is just the latest fundraising challenge for Vicki. In fact she was made an Alzheimer’s Research UK Champion for her significant fundraising efforts with her late husband Jamie.

One such fundraiser involved Jamie rowing 22 miles from Eton to Henley in 2010 raising £97,000, three years after he was diagnosed with early-onset Alzheimer’s. He then completed the challenge again the following year taking the total to more than £200,000.

Jamie sadly passed away with the disease at the age of 67 in 2015 and so Vicki is determined to continue raising money for dementia research in his memory.

“My Jamie’s goal was to raise not only funds but also awareness of dementia as much as he could and his bravery throughout the ten years of his disease made it possible for someone like me with overwhelming vertigo to take the plunge – literally. I am so grateful to those who have yet again dug deep to help our family’s passion to raise money for ARUK and equally grateful to the folk at Netheravon for looking after us so well.”

She has raised more than £7,000 by taking on the skydive and money is still coming in from her friends and family.

“We are delighted that Vicki was able to complete her skydive despite the thick fog at the weekend. We are also very grateful to Vicki for her amazing fundraising efforts which will go a significant way in supporting the dementia research we are funding.

“One in three people over 65 will die with some form of dementia. Currently more than 850,000 people in the UK have this terrible condition.

“It can only be defeated through research but funding lags far behind other serious diseases. The money raised from Vicki’s skydive will make a real difference, bringing us ever nearer to finding new preventions and treatments through the world-class research we fund.”

If you would like to add to Vicki’s amazing fundraising efforts please visit https://www.justgiving.com/fundraising/Vicki-Graham1.