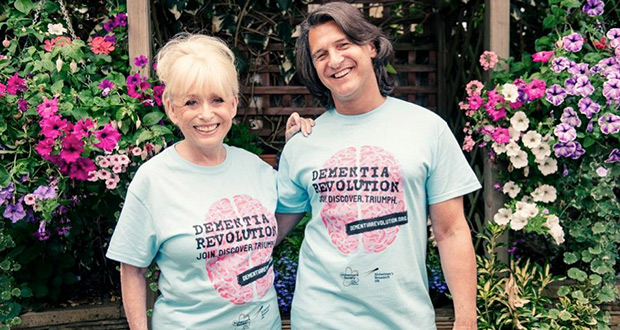 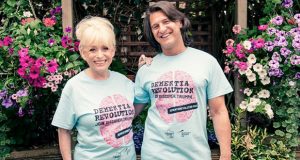 Dame Barbara Windsor and her husband Scott Mitchell announced their support for Dementia Revolution, created by Alzheimer’s Society and Alzheimer’s Research UK as Charity of the Year for the 2019 Virgin Money London Marathon.

Scott, who earlier this year revealed Barbara had been diagnosed with Alzheimer’s disease in 2014, will be running the 2019 Virgin Money London Marathon for Barbara and the millions of people across the world affected by the condition, helping to raise awareness and fund groundbreaking research.

The Dementia Revolution sees leading dementia charities Alzheimer’s Society and Alzheimer’s Research UK join forces in a year-long campaign as the Charity of the Year for the marathon in 2019.

Together they aim to overthrow old attitudes to dementia and raise millions of pounds for the most ambitious dementia research initiative the UK has ever seen, working to find better treatments and a cure – the UK Dementia Research Institute (UK DRI).

Speaking about his experiences and decision to run the marathon, Scott said:

‘I’m really nervous but also excited to be running the Virgin Money London Marathon for the Dementia Revolution next year – when I found out it was on 28th April, it seemed like fate as it will actually be my 56th birthday so I took that as a sign that I had to go for it. I don’t know how fast I will run it, but for me it is more about completing the marathon, no matter what the time, to show my support for Barbara and all the other people living with dementia across the country. Since Barbara’s diagnosis, I’ve learnt so much more about dementia which is why it’s so important we get as many people together as possible to run as part of the Dementia Revolution to raise awareness and vital money for dementia research at the UK Dementia Research Institute.

‘The last few years have been really hard for both Barbara and me as we got used to the profound effect dementia has had on our lives. I have seen many changes in Barbara since her diagnosis and at times its effects can be stronger than others. We kept her diagnosis quiet for so long and we were really nervous about going public with the news but when we did, there was such an incredible reaction of love and support. Sometimes Barbara still thinks no one knows about her condition and makes a big thing of keeping it a secret when we see people we know or meet people out and about. I have had many conversations with her in recent months, with a copy of the newspaper interview in my hand, to explain that it is no longer a secret and that people know she has dementia, which is obviously a really difficult moment for us both.

‘Despite all the changes in Barbara, there is still so much of her there. Her humour, wit and care for others for example. It is her humour I love the most – we have always laughed a lot.

‘To anyone who has got a place in in the Virgin Money London Marathon ballot and still isn’t sure who to run for, please do join the Dementia Revolution team with me to show all our loved ones with dementia, like Barbara, that they are not alone and we stand with them. We need to act now – dementia is affecting so many people.’

Scott Mitchell for the Dementia Revolution

Joining Scott to run for the Dementia Revolution are a team of Revolutionaries, each bringing different experiences of dementia. These include entrepreneur and 2014 Apprentice Winner Mark Wright, whose grandfather has dementia, Dr Amanda Heslegrave, a dementia researcher at the UK DRI, and Carli Pirie, and her cousins Jack and Tom Bradshaw, whose family carries an inherited gene for Alzheimer’s disease meaning they each carry a 50% chance of developing the disease in their 50s.

‘It is wonderful to have Dame Barbara Windsor, her husband Scott, and others affected by dementia joining the Dementia Revolution. As they know first-hand, dementia challenges everyday living for people with dementia and their carers. There are currently no effective treatments to slow, prevent or cure dementia but scientists are working tirelessly to beat it. By joining the Dementia Revolution, we can and will end dementia with research. Until that day, we must continue to bring dementia out of the shadows, so that we can improve care for people living with this terrible illness so that they can lead more fulfilling lives.’

‘We praise Scott and Barbara not only for speaking out about their own experiences of dementia but for urging others to support pioneering efforts in research to tackle the condition. The Dementia Revolution is a unique opportunity to show the world the impact of dementia and raise millions of pounds for groundbreaking research. We’re urgently calling on people who have secured a place in the 2019 Virgin Money London Marathon to stand with us, join the Dementia Revolution and help change the lives of people with dementia.’