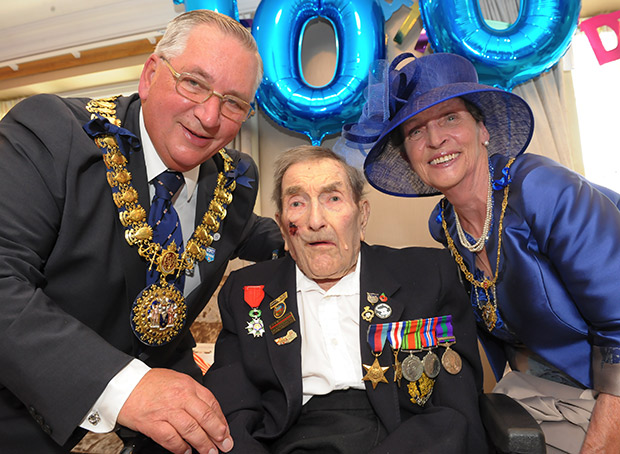 A war hero who landed on Gold Beach on D-Day has celebrated his 100th birthday.

Charles Benford, a resident at Hallmark Care Homes’ facility in Leigh on Sea, Essex has been awarded three medals for his service including the France and Germany Star.

Throughout the day he also enjoyed visits from the Royal British Legion and The Royal Anglian Regiment Association.

He was born on 12th July 1919 in South Fambridge. He then went to live in West Ham with his grandmother and grandfather before moving to Southend when he was 11. His grandfather taught him the butchers trade until he was called up to join the Army in 1939.
He first reported for duty with 2nd Battalion Essex Regiment (The Pompadours) at Warley Barracks (Brentwood) on January, 15th 1940.

From there he served in the Isle of Wight, South Wales and Gloucestershire before the Battalion received large drafts of men to bring it up to strength for the Allied Invasion of France. The Battalion and Brigade landed on Gold Beach on D-Day June 6, 1944 at around 1pm.

Charles – then a Sergeant with a Bren Gun Carrier platoon remembers sailing in a Landing Craft from somewhere near Poole in Hampshire to Gold Beach from where they fought their way in land to liberate Bayeux the following day.

Thanks to Battalion’s bravery and efforts the war was ended with Germany.

Charles who has one son, one daughter, 10 grandchildren and eight great-grandchildren received a card from the Queen congratulating him on his milestone.
Charles, 100 said: “I have had an amazing 100 years and a very special day with my family and friends to celebrate, with the Queen also sending her congratulations.

“I have no secret to longevity, its just the luck of the draw really.”

Lifestyle Leader at Admiral Court Care Home, Sarah Savidge said: “Charles has been a resident at the home for over two years and he is much-loved by all of us here. I am so pleased that he had a great day, as he is our hero and thoroughly deserves it.”