Current pensioners have come close to achieving Keynes’ 80 year old vision of economic bliss – where people are able to capitalise on extended periods of leisure time. But many have fallen short of his ideal because they are unable to remain active and spend their accumulated wealth. Meanwhile, future generations may be forced to work longer hours and experience a sustained reduction in leisure time.

Based on analysis of OECD and Bank of England datasets , the findings will be presented by ILC-UK Head of Economics, Ben Franklin, at the ILC-UK’s Second Annual Future of Ageing Conference today.

Those reaching retirement today have benefitted from falling working hours, earlier exits from the labour force and longer life expectancy. New analysis from the ILC-UK shows how this has translated into far fewer working hours over the expected lifetimes of adults retiring today:

Mr Franklin will argue that despite the success in substantially reducing lifetime working hours and increasing leisure time, those in retirement are not necessarily “enjoying the abundance when it comes”.[4] He highlights ILC-UK research which finds that, on average, older people are “underspending”[5], that poor health prevents older people from doing what they want in retirement, and that most leisure time is taken up watching TV and later on, living at home alone.

Yet just as we get accustomed to shorter working weeks, the trend has started to reverse. New analysis of 300 years’ worth of data suggests that the post-World War II period was an economic anomaly characterised by high wage growth, substantial increases in the productivity of labour and in the successful diffusion of productive invention (see chart). Since the year 2000, growth in each of these areas has stalled meaning people have had to work for longer to keep the economy ticking over. 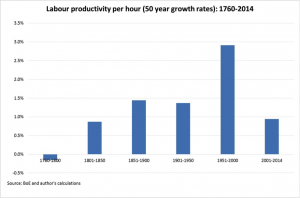 Speaking at the conference, Ben Franklin will say:

“Over eighty years ago, Keynes had a vision that people would work substantially fewer hours and have much more leisure time to use in meaningful ways – to “enjoy the abundance when it comes”. Yet while we reduced the number of working hours across the lifetimes of those retiring today and created extensive periods of adult life outside of the workforce, most leisure time in retirement is spent watching television and, later on, living at home alone. Poor health and disability remain significant barriers to economic bliss in retirement.

Meanwhile, weak economic fundamentals may mean that Keynes’ vision of bliss will slip further from the fingers of those in the workforce today, with slower productivity growth leading to longer hours in work. If, as the data suggests, it turns out that the period 1950-2000 was an economic anomaly rather than the new normal, this will have profound implications for the future leisure opportunities of today’s workers.”

David Sinclair, ILC-UK Director, also speaking at the conference, will set out a positive vision for the Future of Ageing. He will argue that we are at a tipping point where staff shortages, the increasing economic cost of ageing and poor economic fundamentals will force action by policymakers.

Speaking at the conference David Sinclair will say:

“Over the past decade public policy has started to respond to the challenge of ageing. Auto enrolment into pensions has got millions more people saving. We have seen falls in serious illness among older people over the past decade as well as, for example, falls in excess winter deaths. We have seen a growth in age friendly communities as our society slowly adapts to ageing.

We have begun responding to ageing but we are miles from where we need to be. Health and social care funding is inadequate to meet demand, too few people are saving an adequate amount for their retirement and most of us aren’t living as healthily as we should.

But while ageing may seem an impossible challenge for politicians, with political will and action we can ensure the future of ageing is a success rather than a threat to our economy.”

Speaking at the conference, Sinclair highlights 6 “silver bullets” for policy makers to focus effort on, pointing out that achieving change in all these areas is possible with leadership and political will.