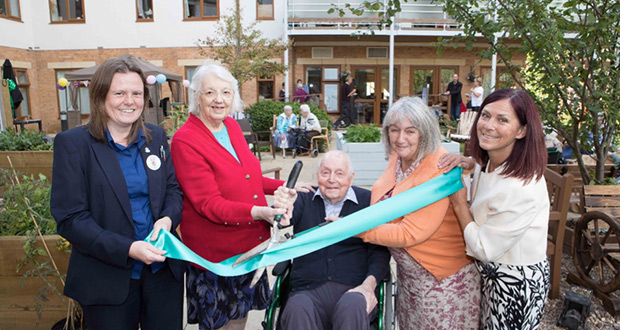 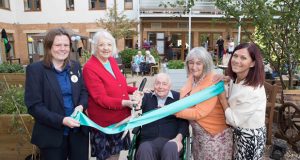 A community care village in Crewe, run by state-of-the-art care village operator Belong, has officially opened its new dementia garden. The garden was designed by award-winning RHS dementia garden designer Carolyn Hardern and made possible with funding from the Tesco Bags of Help scheme. It is open to the wider community and incorporates multisensory features and reminiscence points for the benefit of people living with dementia. It also provides a home for wildlife, including hedgehogs, birds and insects.

Throughout the garden, numerous features provide stimulation for residents with dementia. Sensory displays include baskets of shells, pinecones and jewelry. Bubble columns in the centre of the garden are a focal point, and themed areas are designed to prompt reminiscence; a gardening-themed area has old garden tools and a potting bench, whilst a beach-themed section features a beach scene, deckchairs, a sandpit, buckets and spades. Historic images of Crewe are displayed on another wall.

As well as plants and flowers chosen to attract bees and butterflies, the garden features plants selected for their sensory characteristics, such as lavender, jasmine and rosemary. Raised vegetable and herb planters allow green-fingered residents to grow their own ingredients. Additions to encourage biodiversity include bird boxes, a bug hotel and a hedgehog house, where a family of hedgehogs has already moved in.

Another highlight of the project was the transformation of the village’s bike shelter, which signposts the entrance of the garden. The colourful mural on the outside of the shelter was created from a collage of art made by residents during arts and crafts sessions at Belong Crewe.

The new garden is also home to three hens: Speckle, Ginger and Rusty. These new residents have a coop in the garden and are laying eggs. Violet Clarke, an apartment tenant, has already taken it upon herself to feed them and let them out in the morning.

The official opening was attended by residents of Belong Crewe and their relatives; garden designer Carolyn Hardern; Mark Hinkley of Rope Garden Nursery, who landscaped the garden; Sara Jones, from the Namaste Project, which inspired some of the finishing touches to the garden; Tesco Bags of Help Champion, Cath Blundell and Belong staff. Nick Rowles, from the Cheshire Wildlife Trust, was there to present a Wildlife Friendly Garden Award.

Phil Caine, general manager at Belong Crewe, said: “The dementia garden is a wonderful addition to the village. When combined with our expertise in dementia care, it enhances our ability to provide world-leading support for people living with dementia. It’s already providing lots of joy for our customers and having a therapeutic effect.

“I’d like to thank everyone who helped create the garden, including volunteers from the National Citizens Service, who spent three days here, and Chris McGrath, a volunteer who spent many hours over several months helping to build the garden.”