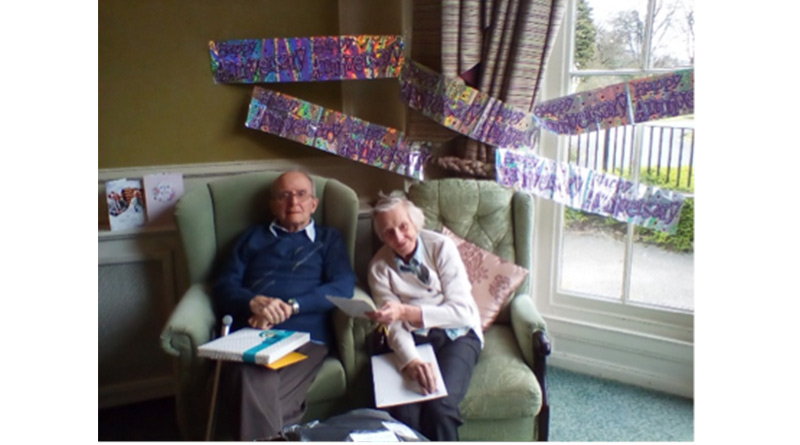 James Kinnear and Jean Kinnear who reside at HC One’s Sabourn Court celebrated their 65th wedding anniversary together this month.

The couple were wed on 2nd April 1955 at the Trinity Methodist Church in Leeds at 2pm, and are still in love to this very day.

James, also known as Jim, was in the Scouts and met Jean back when she was in The Girl Guides. They used to meet up every Tuesday and Friday, not thinking 65 years later they would be side by side.

James spent his life working as a coach builder and Jean was a telephonist. The couple have four sons together; Ian, Stuart, Andrew and Roy, plus grandchildren which they have now lost count of!

The pair’s secrets to a long and happy marriage are to never go to bed on an argument and always say ‘goodnight’, which they both still say to each other even now. They always learned to give and take in the relationship and own up to their mistakes.

The care home of course was unable to celebrate in usual style, however still made sure the special day was marked. The quiet lounge area was decorated and James and Jean had a Skype call with their four sons and other family members, and then opened up gifts that had been sent to the home from loved ones, and they even had a card from the Queen!

There was a lovely cake for them to cut into at tea time too to end a lovely day spent together to mark the joyous occasion.

James and Jean still plan to celebrate properly with their family once the pandemic is over too.