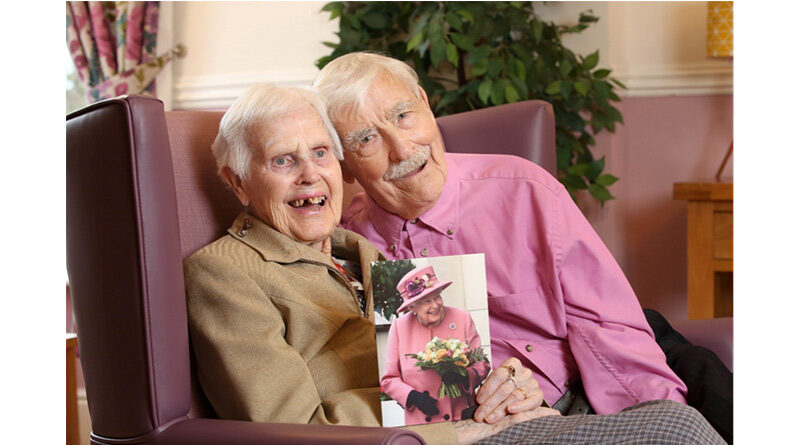 Two residents at a Porthmadog care home are celebrating 70 years of marriage together with a congratulations from the Queen.

Ken (95) and Ellen Whitehouse (92), originally from the West Midlands, met at a bakery they worked at as teenagers and have been together ever since.

Moving to Meddyg Care, a specialist dementia care home group in Porthmadog and Criccieth, in 2018, the couple received a card from Buckingham Palace signed by the Queen to commemorate their platinum wedding anniversary.

Mr and Mrs Whitehouse wed on Saturday 3 March 1951, the same year Snowdonia became a national park and The Archers was first broadcast on the BBC.

During their time together, they enjoyed frequent trips to Switzerland, leading them to try their hand at learning German and they often enjoyed weekend getaways.

Mr Whitehouse, who worked in the steel industry for 27 years, said: “We were in our mid-teens when I asked her on a date at the bakery we worked at and luckily for me, she said yes.

“It was my mother who suggested I ask Ellen to marry me and we wed at Wednesbury registry office soon after. Fast forward 70 years and the Queen writes to us in recognition of our anniversary; it was a wonderful surprise.”

Mrs Whitehouse, who worked for a local council, said: “We’ve had plenty of adventures throughout our marriage. Every weekend we would get a guest house with a lake somewhere. Ken would stay by the lake fishing and I’d enjoy sunbathing whilst watching him. We’d have some fabulous BBQs, too.

“We also have fond memories of Switzerland and we enjoyed it that much we started night classes to learn German. We loved our holidays and would try and go at least twice a year.”

The couple had some advice for those in relationships who would also like to reach their platinum wedding anniversary.

Mrs Whitehouse said: “When it comes to relationships, I always considered my husband in every decision I made and that would be my advice for a long-lasting marriage.”

Mr Whitehouse added: “Our first 12 months as Mr and Mrs were the best, Ellen was a feisty one. Marriage isn’t always easy and sometimes it can be a struggle but stick at it.”

Natasha Evans, activities manager at Meddyg Care, said: “It’s lovely to see them celebrate their platinum anniversary together. They were so happy when they opened their card from the Queen and reminisced over old photos of themselves.

“They’re a typical married couple; a day isn’t complete without a disagreement. But they’re very loving towards each other and brighten up Meddyg Care.”