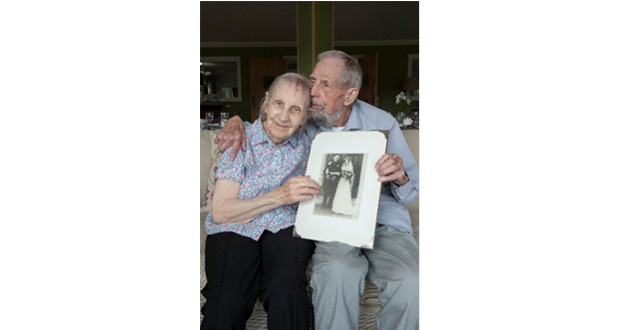 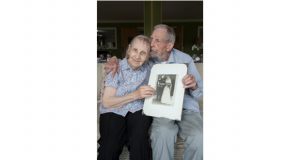 A couple from Basingstoke who live together at a care home celebrating their 65th anniversary have revealed the secret to their long marriage – always supporting one another ‘especially when life gets tough’.

Tony Greening, 86, and his wife Carol, 84, are both cared for at Harrier Grange, which specialises in residential, nursing, dementia and respite care in Andover.

The couple met when they passed each other while they were both walking with friends along the Plymouth Hoe in 1952. They exchanged smiles and began chatting before Tony, who was stationed with the Royal Marines in the city, asked Carol out on a date.

Tony and Carol married the same year at St Boniface Church in St Budeaux. They had five children, Stephen, now 62, Janet, 61, Catherine, 59, Paul, 54 and Sara, who sadly passed away at the age of 51 last year.  Tony and Carol also had 12 grandchildren and 17 great grandchildren.

The couple moved from Plymouth to Bethnal Green in East London in 1966 as the work opportunities were better for Tony before moving to Basingstoke two years later where they remained until earlier this year. After both being admitted to hospital, they moved from their bungalow to Harrier Grange.

Asked what the secret was to a long marriage, Tony said: “Each marriage is unique but we have always supported each other even when life gets tough, while trying to accommodate our individual interests, needs and ambitions.

“We’ve faced a lot of challenges in life, and while we have never had a lot of money and material things, we worked hard and made the best of what we had. We have remained deeply in love and committed.”

Tony was a Royal Marine in 42 Commando from 1948 until 1955. He served mostly in the Far East and was in action in the Malayan Emergency when British Commonwealth Forces fought against the Malayan Communist insurgency. The conflict lasted for more than 12 years and resulted in over 500 British military personnel being killed.

Tony said Carol, before her dementia took hold, was a very intelligent and resourceful woman. She passed the 11-plus for grammar school and later in life passed the Civil Service entrance exam, all while running a big family home.

Son, Paul added: “Bearing in mind my mum’s dementia and my dad’s physical health needs, they are living a contented life at Harrier Grange now, which is very clean, bright and modern.

“A few months ago when my dad was extremely ill, the family never thought we would be celebrating their anniversary. They are now in a caring and safe environment and we are very grateful to Harrier Grange for organising a lovely family meal so we could mark the anniversary.”

Harrier Grange care home manager Kay Kelly said: “Tony and Carol are so lovely together and we absolutely love having them here at Harrier Grange. Everybody is very fond of them both.”