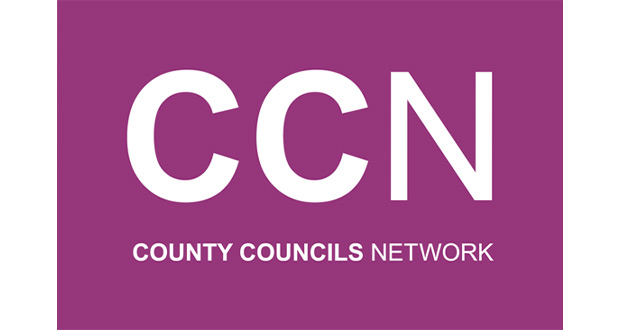 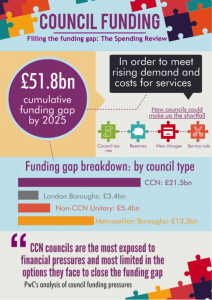 Councils in England could face a funding black hole of over £50bn over the next six years, with local authorities warning they will have to resort to providing the ‘bare minimum’ if no extra funding is made available.

An independent analysis of councils’ financial sustainability up to 2025 from PricewaterhouseCoopers LLP (PwC) for the County Councils Network (CCN) has found that rising demand for services and rising costs, driven in part by inflation, could contribute to councils needing an additional £51.8bn of funding over the period 2019-2025.

Download an executive summary of report by clicking on the picture to the left. To download the full, technical report, click here. It received coverage on BBC News yesterday which can be can viewed here.

CCN is today warning that yearly council tax rises, using their reserves, and making services more efficient and productive, will not be anywhere near enough to fill the funding gap; which means that councils will have to set out further rounds of ‘draconian’ cuts to local services, providing a basic, ‘bare minimum’ core offer to residents. The network argues that even taking these actions will not be enough to prevent some councils from being unable to manage their budgets with the scope for savings narrowing each year.

Importantly, filling this funding gap only keeps services ‘standing still’ – rather than improving or enhancing them, nor reversing the last nine years of cutbacks. If councils raise council tax by 2.99% each year, the cumulative funding gap will still be over £30bn. This methodology assumes government continue will give councils the flexibility to raise local council tax bills by 2.99% – this has not been confirmed.

County leaders, who run some of England’s largest councils, argue that today’s report from PwC demonstrates the need for government to provide councils with a significant funding boost in this year’s anticipated Spending Review over the next three years or provide immediate clarity and emergency funding for next year if the review is delayed owing to Brexit uncertainty. The funding gap for this current year alone stands at £4.8bn.

County leaders are calling for immediate clarity from government.  If no extra funding is forthcoming, they warn that council finances will be plunged into ‘disarray’ due to the widening funding black hole.

Watch a video below summing up the report’s key conclusions and arguments – alongside CCN’s asks for fairer funding for county authorities. and additional funding for all councils.

PwC’s analysis found that county authorities, which make up 46% of England’s population, face the largest funding pressures and are most exposed to financial risk – with limited ability to raid reserves or to raise fees or introduce charges for certain services.

The report also outlines that those counties bear the brunt of funding pressures into next decade, fuelled by rising costs for delivering services and rising demand for them. The funding gap facing those 36 areas over the six-year period amounts to £21.5bn, 41% of the total. Metropolitan boroughs make up £13.3bn, 25% of the total, and London boroughs just 7% or £3.4bn.

Even if county authorities raised their council tax by 2.99% – and in addition their tax base grew at an optimistic rate of 1.98% per year over the six-year period it would only eradicate less than half of their funding gap – leaving a funding black hole of £11.6bn for those county authorities. Those rural areas have seen the largest reductions in government funding, and as a result council tax will represent almost 70% of their income by 2024/25. If county authorities raise council tax by 2.99% each year over the next five years, it will add £248 to the average Band D household’s bill – bringing the yearly average to over £2,000 for the majority of rural households; the highest in the country and double the rate of some councils in inner London.

“Over the last decade councils have played a crucial part in reducing the deficit, but the yearly compounding effect of funding cuts and rising demand means that the situation is fast becoming untenable. This research demonstrates the need for government to provide all councils with additional resources at the Spending Review, with the most significant financial challenges being experienced by county and metropolitan authorities most in need.

“Today’s report concludes that counties are most exposed and least able to address these financial pressures – local government is at the limit of its elasticity. Therefore, this Spending Review is crucial if we are to protect and enhance services.

“If government does not provide additional funding for councils over the medium term, many local authorities will resort to providing the bare minimum, with many vital services all but disappearing, particularly preventative services. Even these draconian cuts won’t be enough for many well-run councils to balance the books and it will leave our finances in disarray with many of us struggling to deliver even the basic level of local services.

“With the Ministry of Housing, Communities, and Local Government expected to put together an ambitious but realistic submission for additional departmental funding in the Spending Review for local authorities to match population growth and rising demands and demographic pressures, particularly social services, it is imperative that the Treasury delivers.”

As well as projecting forward, the research also looked at the funding pressures facing councils over the previous four years based on councils spending need to provide ‘a more consistent level of service’. It found that CCN councils faced a funding gap of £5.4bn between 2015 and 2019. Conversely, councils in London had a notional funding surplus of £2.4bn over the same period.

CCN said that this is further evidence of the ‘historic underfunding’ of shire counties compared to urban areas. In 2015, the report suggests they had a ‘underlying’ £1bn notional funding gap which would indicate they had £1bn of ‘unmet needs’. Currently, county authorities are the lowest funded upper-tier councils, receiving just £153 for core services – 65% less than London and 52% less than metropolitan authorities.

Government is currently undertaking a review of council funding – called the ‘fair funding review’ – which is planned for implementation early next year. CCN argues that the review must begin to eradicate the ‘historic underfunding’ of counties.

“Today’s report confirms the extent of historic underfunding for counties. More generous funding for London Boroughs has allowed them to provide more services for their residents while maintaining some of the lowest council tax rates in the country.

“Alongside the Spending Review, these funding imbalances must be addressed by the government by following through with the implementation of its proposals for the fair funding review to begin to eradicate the unfair nature of the present methodology.”

“The publication of this research by CCN comes at an important time. It lays bare the stark reality facing the sector and severe financial challenges now being felt by all types of councils.

“The modelling undertaken by PwC is the most advanced and detailed to date. They looked at more than 17 different cost drivers across 10 local government services, alongside the impact of other rising costs on council budgets such as inflation and the living wage.

“PwC’s report provides a platform for the sector to unite around ahead of the Spending Review and make a united case for additional funding, while also recognising that the diverse circumstances faced by different types of councils to influence the fair funding review.

“It is county authorities that have the most limited choices in responding to future spending requirements. We now want to take our case to the Treasury and convince them of the need to invest in all of local government, while ensuring that the government implement the fairer funding review so that residents can be provided with a more consistent level of service based on genuine need.”