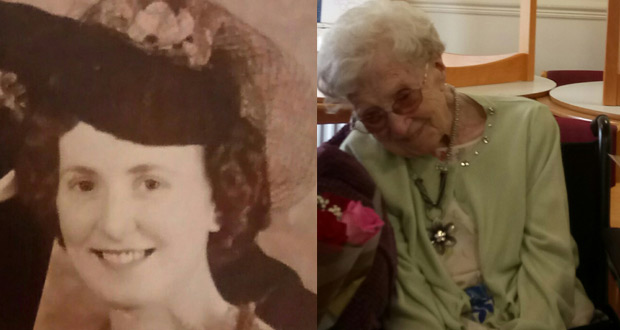 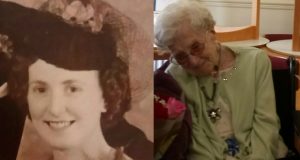 A care home resident from Glasgow has revealed her simple top tips for reaching her milestone 100th birthday – taking everything in moderation.

Ina Robertson, a resident at Bupa’s Quayside Care Home in Yoker, attributes her longevity to a wholesome, balanced diet and not overindulging in unhealthy habits.

The centenarian is known to only enjoy a glass of Croft Original sherry, her drink of choice, on very special occasions.

Ina was born in 1917 and grew up in the east end of Glasgow but, after marrying a shipbuilder who often relocated for work, she called many other areas of the city home, including Helensburgh, Clydebank, Knightswood and Drumchapel.

Ina and her husband Peter eventually settled down in a cottage in Drumchapel where she dedicated her life to raising her two sons, now 64 and 71, and caring for her family. This family has since expanded and Ina is now a grandmother of two, and great grandmother of three.

In her youth, Ina trained as a nurse after school – a career that led her to provide a vital service to both soldiers and civilians during the war. She also operated the emergency telephone switchboards over the war period.

Later in life, she returned to work as an assistant in the local bakers – Hodge on Kinclaven Avenue – where she was known in the community to be quite the character.

Kirk Roberston, Ina’s son, said: “My mum’s attitude to food and drink was influenced by the rationing during the war, so she has always been careful not to overindulge and instead appreciates and savours good quality meals.

“This is a trait she attributes to reaching her 100th birthday and she’s obviously on to something as she’s in good health.

“She’s always loved socialising and we’d often find her chatting our neighbours’ ears off when we were younger.

“She’s also been a big soap opera fan and Coronation Street is by far her favourite. Life absolutely came to a standstill in our house the moment the programme started!”

Ina celebrated her birthday with friends and staff at Quayside Care Home and no less than 3 generations of her family as her son, grandchildren and great grandchildren all joined the party to mark her milestone.

Susan MacDonald, Home Manager at Bupa’s Quayside Care Home, said: “Reaching 100 is such a landmark event and we’re all so proud of Ina.

“She’s a lovely character to have around the home. She’s always chatty and never fails to put a smile of everyone’s face.

“We all very much enjoyed celebrating her birthday with her.”