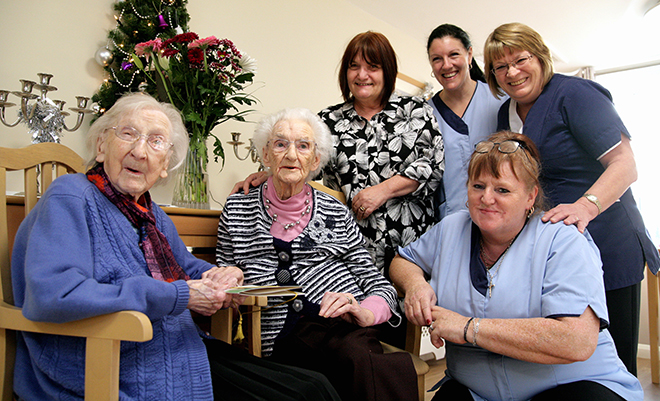 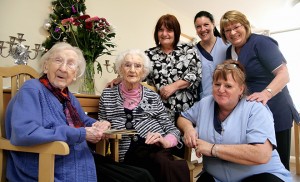 A Swadlincote care home has two significant reasons to celebrate after two of its residents surpassed their centuries in the space of week.

Seale Pastures House residents Eva Bird and Ethel Lambert celebrated their 108th and 102ndbirthdays, respectively, at a special party held at the home.

The home, on Burton Road, Acresford, which is operated by Akari Care, specialises in residential care for up to 40 elderly residents.

Eva, who has been a resident at Seale Pastures House since 2013, enjoyed many happy years married to Thomas Arthur and also had a son, also called Thomas, who sadly passed away this year, as well as one granddaughter, Judith – daughter to Thomas and Sheila, Eva’s daughter-in-law.

She worked in an elastic factory and enjoyed singing classical and Church music, having been a member of the Baptist Church.

Ethel has been with the home since April 2015 and, like Eva, was a prominent singer, as she performed in a Church choir for more than 20 years, and taught in a Sunday school.

Born into a family of nine children, Ethel was the eldest daughter and has three sons: Chris, Alan and Graham, as well as six grandchildren and four great grandchildren. She was married to her husband, Arthur, for 72 years, until his passing in 2011.

Councillor Neil Atkin, chairman of South Derbyshire District Council, was in attendance, together with family members of both residents.

Diane Leary, home manager at Seale Pastures House, said: “Despite their relatively short time with us, Eva and Ethel are well respected residents and are both characters around the home. It is important to recognise birthdays and it was nice of Councillor Atkin to pay the ladies a visit, as well as their family members. It was a special day and one that was enjoyed by all of our staff and residents.

“I would like to thank everyone who attended and on behalf of everyone at Seale Pastures House, wish Eva and Ethel all the very best.”