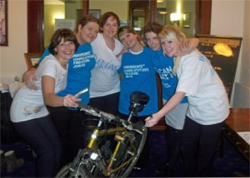 A busy year of charity events involving residents and staff at homes run by South Coast operator Colten Care has raised more than £28,000 for good causes.

A wide range of charities – local, national and international – have been helped under Colten Care’s policy of linking its activities programme with community fundraising.

Residents in each of the provider’s 19 homes are encouraged to nominate a main charity to help every year, leaving scope for other organisations to be supported too.

Activities organisers, social carers and other team members then enable residents to contribute directly in meaningful ways such as making arts and crafts to sell at fundraising fetes and suggesting ideas for sponsored quizzes.

As an example of the range of support, the home that raised the most money – Abbey View in Sherborne – helped its main charity, Parkinson’s UK, as well as the RNLI, Macmillan Cancer Support, St Margaret’s Somerset Hospice, the Philippines Appeal and the annual Remembrance Day Poppy Appeal.

Abbey View raised a total of £3,045 overall during 2013. One of its events was a sponsored cycle ride for Parkinson’s UK. Fifteen members of staff rode from Sherborne to Weymouth, a distance of 27.7 miles, with five residents following in a minibus to cheer them on.

Colten Care Activities Manager Karen Burdon, who heads the provider’s 37-strong activities team, said: “We have encouraged our team members to think outside the box when it comes to fundraising. It is the residents’ choice who to raise money for each year and together they are coming up with some great ideas. Putting a charity focus into our activity programme is a lovely way of building links with other community organisations.”