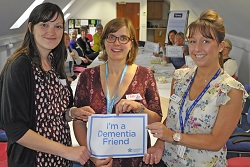 Colten Care, which has 19 homes in Hampshire, Dorset and Wiltshire, is backing an Alzheimer’s Society campaign to raise awareness of dementia and tackle the stigma and lack of understanding around it.

From this August, the company is planning to run a Dementia Friends session for staff and the community at each of its homes on the first Wednesday of each month from 2pm to 3pm.

Dementia Friends are people who have undergone a one-hour face-to-face information session or watched an online video to understand how they can best help those who live with dementia.

As part of its support for the Alzheimer’s Society, Colten Care hosted a meeting of more than 20 community volunteers known as Dementia Friends Champions.

All have been trained and supported by the Alzheimer’s Society to run Dementia Friends Information Sessions.

They gathered at The Aldbury dementia care home in Poole, Dorset, to share their experiences and knowledge in building dementia friendly communities.

Among them were people who have run workplace and community sessions since the Prime Minister launched a national dementia challenge two years ago with the aim of recruiting a million Dementia Friends.

Most participants had not met each other before and it was the first time such a meeting had been held at a Colten Care home.

Camilla Alfred, Regional Support Officer for the Alzheimer’s Society, said: “We are grateful to Colten Care for not only hosting the meeting but also for its active ongoing support in helping us build dementia friendly communities.”

Colten Care has around 30 Dementia Friends Champions among its workforce in a mix of roles including managers, trainers, healthcare assistants and marketing staff. They will provide the information sessions to help colleagues become Dementia Friends.

Denise Arthur-Briskham, Home Manager at The Aldbury and a Dementia Friends Champion, said: “The Dementia Friends programme is designed to transform the way we think, act and talk when it comes to dementia. There are many ways to help someone with dementia, some of them small and easy to do. It’s all about raising awareness.”

Alzheimer’s Society research shows there are currently 850,000 people living with the condition in England. The figure is expected to rise to a million within ten years and 1.7 million by 2051.

For more information on the Dementia Friends initiative, visit www.dementiafriends.org.uk