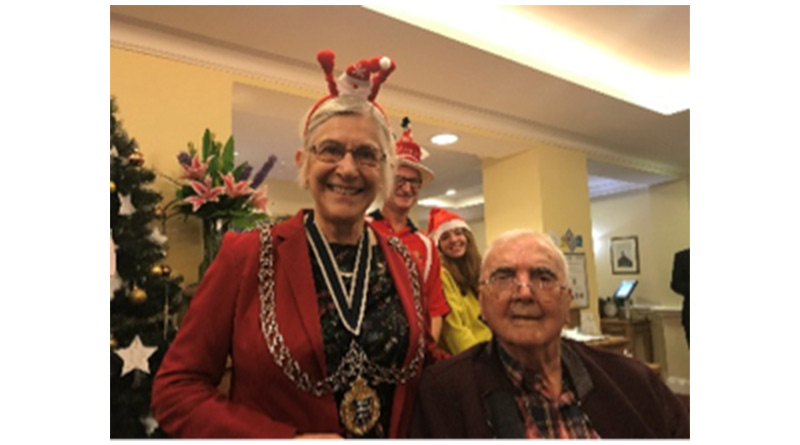 The charity’s three Homes – in Solihull, Surbiton and High Wycombe – have been decked with Christmas lights, and a sleigh-full of festive activities are well underway.

Residents at the Homes have been taken on outings, participated in activities, attended concerts and enjoyed visits from local schools, with the festive programme stretching all the way through to the New Year.

At Solihull, Christmas elves and fairies (aka staff members) crept into the Home’s reception area on the night of Monday, 2 December, to transform the area with a stunning tree and lights while residents were asleep. Home Manager Cheryl Harbourne said: “It was worth staying up half the night to see the look on the residents’ faces. They thought Christmas had come early!” Pupils from Widney Junior School also visited the Home in Tudor Coppice on Thursday, 5 December to sing carols. It was one of several concerts that are taking place at the home in December, while residents and their relatives also made mince pies and snowballs to celebrate the festive season.

At Surbiton, Kingston Mayor Cllr Margaret Thompson switched on the Home’s Christmas lights on Wednesday, 4 December. She spent time talking to many residents in the Home, including 33-year-old Army veteran Stephen, who suffered severe injuries in a bomb blast while serving in Iraq. She told residents her son, who is serving in the Royal Electrical and Mechanical Engineers (REME) is set to return from active duty in the Middle East for Christmas. The Mayor also spoke to ex-REME serviceman Dick, 92, and World War Two veteran Michael, 95. She said afterwards: “It was a wonderful day. It really felt like and looked like the beginning of Christmas. The residents were really happy and it was a delight and a joy to meet them.”

The following day Reception year pupils from St Matthew’s School paid their regular Thursday visit to the Surbiton Home to meet residents. The charity arranged for presents for each of the pupils and balloon modeller Dali Ballooni was also there to entertain all.

The Home in High Wycombe opened to residents in April this year. Staff and residents marked its first Christmas with outings, festive films and lots of activities. They made gingerbread and wreaths and went to Waddesdon Manor to view the stunning seasonal lights. Throughout December, residents have also had carol singers visit the Home and watched classic Christmas films. Home Manager Chelle Daly said: “I know every Christmas is special, but this is extra special as it’s our first Christmas together. It’s wonderful to share this time of the year with our lovely residents, and we’re looking forward to welcoming more residents in 2020.”