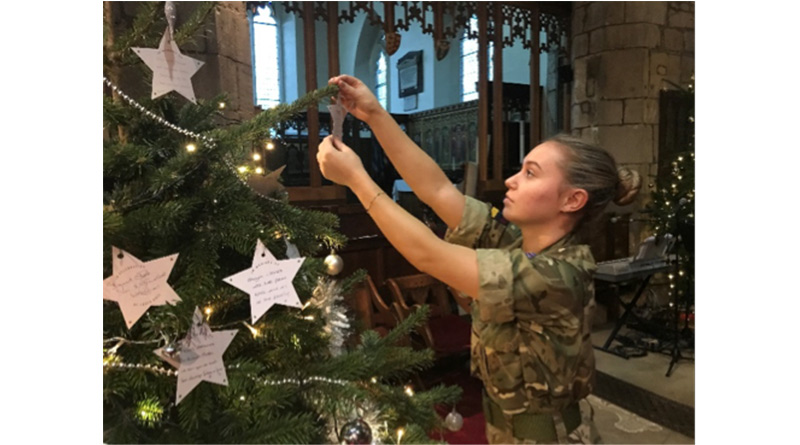 A series of services have been held by Royal Star & Garter to celebrate the lives of its residents past and present and the Christmas season.

The annual Starlight services took place in Solihull, Surbiton, and High Wycombe at the beginning of December, and included hymns, readings and carols.

The services were held at St Matthew’s Church in Surbiton on 1 December and St Alphege Church in Solihull on 7 December. Both were attended by members of the local community. A smaller private service was held at the newly opened Home in High Wycombe on 1 December.

Christmas trees were adorned with stars bearing personal messages written by friends and family in memory of loved ones who had died.

The service at St Alphege Church featured the church choir and readings by residents. Following the services guests were treated to mince pies and mulled wine.

There were also readings at Surbiton and performances from the Star & Garter Singers – a choir made up of residents, relatives, volunteers and staff. The High Wycombe Starlight service included readings, hymns and carols. It was led by Padre Squadron Leader Chrissie Lacey from RAF High Wycombe.

The Royal Star & Garter provides loving, compassionate care for veterans and their partners living with disability or dementia.

Both Vicky Peirson’s parents were cared for at the Surbiton Home. Her father died 2015 and mother in July this year. She said: “It was wonderful to place a star on the tree in memory of my parents. It was a moving service but not too sad. For me it was a celebration and a lovely way to start Christmas.”

The Starlight Service at High Wycombe was its first, as the Home only opened in April this year. Home Administrator Lucy Gibbons said “It was poignant and very moving. I felt honoured to be able to share this beautiful service with our residents in the Home.”

Sue, who lives at the Solihull Home with her husband, read a poem at the Starlight service. She later said: “I enjoyed it very much. It was very touching.”