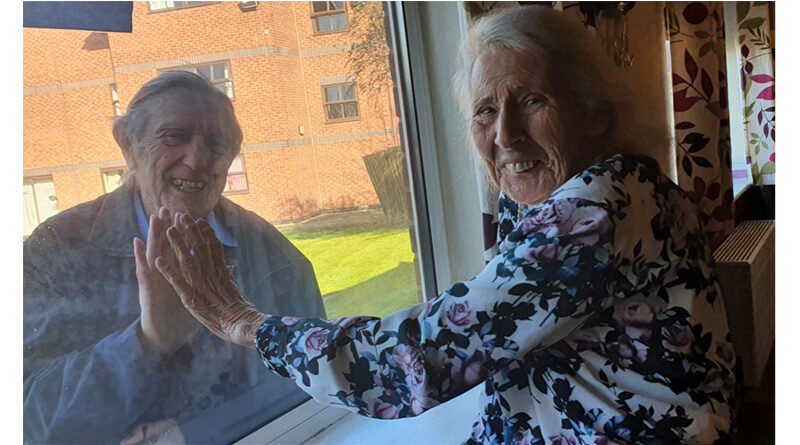 Bill and Barbara, both aged 91, first met when they were only six years old. Bill became close friends with Barbara’s brothers, and he would visit Barbara’s family home every day. It wasn’t until they were in their late teens that the couple began to court. They quickly fell head over heels in love and married in 1956.

Barbara moved in to Moorgate Hollow, a residential care home in Rotherham, two years ago, on the recommendation of medical professionals due to the specialist dementia care the home provides.

To celebrate the special anniversary, the care team at Moorgate Hollow showered Barbara with flowers and balloons and played her favourite tunes to dance along to. The couple’s 65th wedding anniversary was made all the more special by receiving a card from Her Majesty the Queen.

Every Monday, Wednesday and Friday Bill visits Barbara from Brinsworth. Throughout the pandemic, he has remained devoted to her and has continued to visit as often as restrictions allowed, waving and chatting through her bedroom window while it was not possible for visitors to enter the care home. The couple have two children, Ian and Jan, and three grandchildren whom they cherish.

Bill attributes his long and happy marriage to unconditional love and always putting his wife first.

Bill Moore said, “I want to wish Barbara a very happy 65th anniversary, I have loved you for many years and always will. We also want to thank Her Majesty the Queen for sending her best wishes.”

Lyn Pilkington, manager at Moorgate Hollow, said: “Everyone at Moorgate Hollow knows Bill and Barbara and their love story is an inspiration to us all. We enjoyed celebrating such a momentous occasion with the couple and we are looking forward to creating many more happy memories with them.”