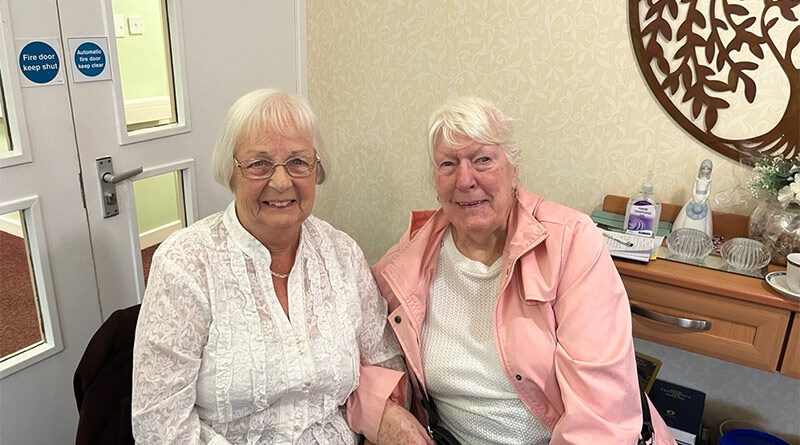 TWO childhood best friends – who lived next door to each other growing up in Linlithgow – have reunited by chance after losing touch 60 years ago.

Irene Gresty lost touch with Janet Henderson when she moved from the area after her husband was deployed by the Navy.

The pair – both 80 years old – had been living just minutes apart at separate Bield developments in Linlithgow for the past three years but, despite living so close, their paths had never crossed.

A recent event hosted by Bield, focusing on the use of technology to enable tenants to live more independently, helped bring the best friends back together.

Irene, who lived in a host of countries, including Singapore, before returning to Linlithgow to reside at Brae Court, said:
“I moved back six years ago as my family still live here. I loved the area growing up so wanted to settle down to enjoy retirement.

“From speaking to people I’d known in the past, I found out Janet still lived in the area but our paths hadn’t crossed.

“We were joined at the hip growing up as we were neighbours and also went to school together, we have many fond memories of sticking up for each other and playing in the park.

“I just couldn’t believe my luck, after all these years we just bumped into each other! My heart skipped a beat.”

The two women vowed to never let it go that long again without seeing each other and spent the full afternoon catching up and taking part in discussions about technology in care – a major contrast to what they would have been getting up to in the 1960’s.

Janet, who resides at West Port, said:
“At Bield, you’re always doing different activities and bumping into people you haven’t seen in a while, but I couldn’t believe I got to reconnect with someone I knew so long ago.

“People often move away from the area, and you lose contact, it’s the way life goes.

“We both got married and now have different surnames. I hadn’t thought anything of it when someone told me Irene had moved back to the area as I didn’t recognise the name – so when I saw her at the event it was pretty surreal.

“We exchanged numbers so I’m really looking forward to meeting up in the future, we have many years to catch up on.”

Tracey Howatt, Director of Customer Experience at Bield, said:
“We often have friends reuniting after not seeing each other for a long period of time, but I don’t think we have ever had anything like this before.

“It’s lovely for the two ladies to reunite and it just shows, you never know when you’ll bump into an old friend again.”