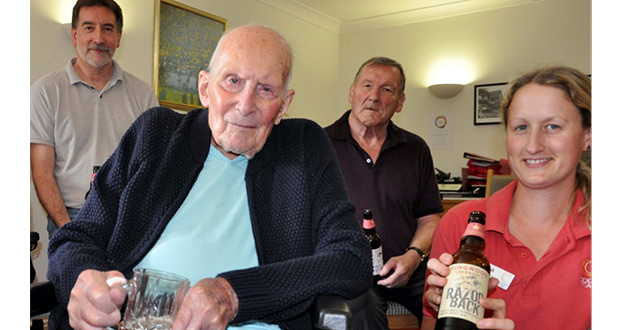 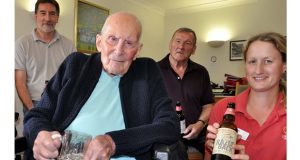 One of Dorset’s oldest real ale fans has been sampling his favourite tipple again thanks to an innovative tie-up between his new care home and a nearby brewery.

Former army officer Richard Earnshaw, 103, is enjoying the taste of best bitter at West Moors home Brook View where he moved to earlier this year.

Run by family-owned Colten Care, the home has a partnership with Ringwood Brewery featuring flagship beers on the menu and tasting sessions led by brewing experts.

Richard was among a group of residents, relatives and friends hearing about the art of Razorback best bitter making from brewery representative Haydn McCarthy.

Born in London during the First World War, Richard remembers having his first pint of beer on the way to see an Arsenal match with his father and grandfather.

After working in a local government architects’ office, he joined the army in World War Two as a supply clerk, serving in India and rising to become an officer in the Royal Indian Artillery.

But it was not until Richard and his wife Katherine moved to Dorset in 1984 after his civilian career as a senior NHS administrator that he tried Ringwood Brewery’s best bitter and declared it his favourite tipple.

In retirement Richard took the chance to spend more time on his lifelong interest in painting, spending two years at Harrow School of Art.

Living in Dorset he continued painting and also ran workshops for students. He is Life President of West Moors Arts Society and he has written and illustrated two books including an account of his wartime experiences.

Asked for the secret of longevity and how he feels about his age, Richard did not mention real ale but said: “103 is very old, isn’t it? I think living this long is very much about keeping the brain active. That’s what keeps you going.”

Sarah Harley, from Brook View’s Companionship Team, said:  “We want all our residents to continue enjoying the good things in life that they love, in a safe, responsible environment. It’s lovely to see Richard having a sip of his favourite tipple at the age of 103.”