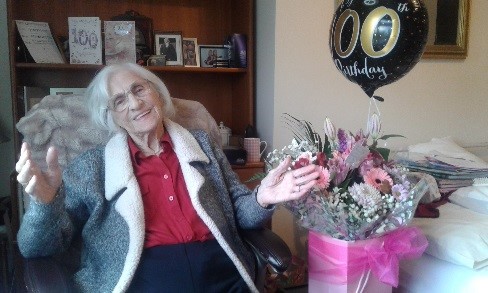 A Southampton woman who told the 34th President of the United States, Dwight Eisenhower, to wait in line for his mail has celebrated turning 100 years in the comfort of her own home thanks to the assistance of Promedica24 carers.

Daisy Elizabeth Gallop, otherwise known as “Babe,” recalled the times when she touched base with war time Prime Minister, Winston Churchill, and King George during tours to inspect the damage that German war planes had done to her beloved home city and childhood home.

“Babe”s been reliving her memories of growing up with little money in Northam, including the time she hid a penny under her foot during a game of “heads or tails” with friends to give to her mother for the meter so they didn’t have to sit in the dark.

Babe met the then American Army General, Eisenhower, in Southampton Docks when she was a post woman delivering mail to his U.S. troops and declined to give him his mail when he requested it, stating that she had to deliver it as instructed.

Mark Muller, Regional Partner at Promedica24’s Dorset, Hampshire and the New Forest branch, commented: “Elizabeth is an amazing woman with a great sense of humour who has clearly led a very exciting life.

“Our carers have built up a strong rapport with Babe and her family and she’s always a real pleasure to visit. We’re delighted that we could help her to live the independent life she so cherishes in the home that she has lived in for many years. It truly is an incredible achievement.”

Babe’s husband John had been a German prisoner of war for four years after trying to defend Crete against the elite paratroopers. The couple married on 16th March 1940 and enjoyed 54 years of marriage together before John’s passing.

The pensioner received a birthday card from the Queen in November and 75 family members and friends, including her four children, 10 grandchildren and 13 grandchildren, attended her birthday party at Thornhill Baptist Church Hall.