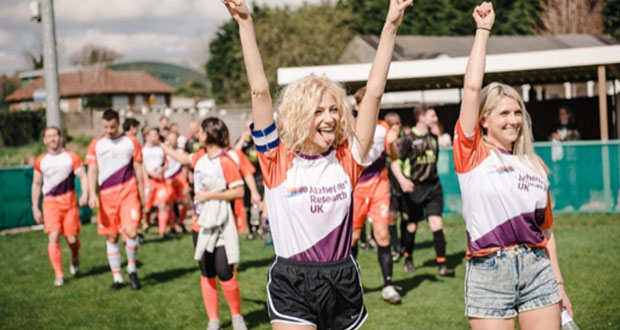 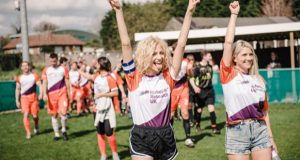 Pixie Lott, Judy Murray and Wayne and Frankie Bridge among famous faces taking to the pitch

Stars from the worlds of music, screen, stage and sport united in the fight against dementia this afternoon (Sunday) at a charity football match for Alzheimer’s Research UK.

The star-studded event in Kent between ex semi-professionals and celebrities was organised by singer Pixie Lott, her uncle Ricky Bennett and their family and friends.

Pixie scored twice to earn her celebrity side an 8-8 draw – celebrating her first strike with a cartwheel.

Joining Pixie in the celebrity line-up was her model fiance Oliver Cheshire, and The Saturdays singer Frankie Bridge who played alongside her husband and ex-professional footballer Wayne Bridge.

Ricky, 47, is running this year’s London Marathon for Alzheimer’s Research UK in memory of his mum Margaret Bennett, known as Peggy, who was Pixie’s nan. The 26-year-old star decided to help with Ricky’s fundraising, and rounded up a group of her celebrity friends to go head to head with her uncle’s team.

Peggy, who lived in Sidcup, Kent, died with vascular dementia in 2014 at the age of 83. Pixie was also raising money for the UK’s leading dementia research charity in honour of her nan on her mum’s side, Amelia Martin, who died with Alzheimer’s disease at 84 in 2012.

Ricky, who is the joint manager of Erith Town FC, fielded a side made up of ex semi-professionals from Concept Old Boys, the veterans’ team he plays for on Sundays.

Hundreds of people packed into a sunny VCD Athletic FC stadium in Crayford, Kent, to watch the match, which ended in a draw.

The event raised over £3,700 for vital dementia research. The impressive total was helped by a raffle, with prizes including signed Leicester, Tottenham and England shirts by Match Of The Day presenter Gary Lineker, a signed t-shirt from world number one tennis players Andy and Jamie Murray, and an evening for 15 at Mahiki Club in London’s Mayfair.

Pixie, who was fresh from performing her new single Baby on The Voice UK final the night before, said: “It’s been amazing, we’ve had so much fun. I haven’t played football since primary school and it’s been so good, everyone’s got stuck in, all my family, all my friends. It’s good to get everyone outside for a great cause.

“This is my first charity football match and it’s been perfect. It’s great to know it’s raised so much money for a charity that’s close to my heart.

“It’s always hard to fit things in the schedule. But this was the date my Uncle Rick gave us so I said ‘yes I’ll get it in the diary’. We’ve seen dementia first-hand and it’s so sad. It really affects a person and changes them and it’s devastating.

“I’ve seen it on both sides of the family and how it affects everyone. All the work Alzheimer’s Research UK does is so important and I’m so happy with the turnout today.

“I’ve always been a big supporter of Alzheimer’s Research UK and I’m so pleased with how much has been raised.”

Wayne and Frankie Bridge, whose two children watched their mum and dad from the sideline, spoke about their personal experience of dementia.

Frankie said: “I was doing a version of football, my own version because I haven’t got a clue what I’m doing. I look like such a girl but Pixie did well for us. I don’t think they’ll let me back on after half time.

“As well as coming along to support Pixie today, we came because Alzheimer’s Research UK funds dementia research.

“It’s something that quite a few of my grandparents have had so I’ve been around it quite a few times. It can be so sad for everyone and it’s so common.

“The more awareness that can be raised and the more people donate- hopefully we’ll get to the bottom of it.”

Wayne said: “It’s a great charity especially when those around you have lived with it. The more you learn about it the better and it’s great to support the charity. I had a great day.”

Judy Murray said: “I really enjoyed the day, it was family-focussed and the sun was shining. The whole thing was just about having fun and having a bit of a laugh.

“If I have spare time I’d rather do anything than play tennis. To have a good old run around in the sunshine was just lovely. Football is completely different to tennis, the football pitch is so much bigger.

“Everybody knows someone who has lived with dementia and it’s a great way to raise awareness and money for Alzheimer’s Research UK.”

Matt Richardson said: “I was on the pitch for longer than I would’ve liked and longer than I thought they would’ve let me. I really enjoyed it, it was a great day. My dad and brother are huge football fans so when I said I was going to be on the pitch with Wayne Bridge they said: ‘But you don’t even like football!’. They were really jealous.

“My grandad has dementia. It’s weirdly featuring a bit when I go on tour in the autumn. As much as it’s horrific and sad he says some really funny stuff. It’s eeking into my standup. If you don’t laugh you’ll cry.

“I see my grandparents a lot, they live fairly close. My grandad has had dementia for the past couple of years and my nan finds it really tough. Some days it’s fine, some days it isn’t.

“One day he wasn’t in the house and we panicked and thought he was missing, but it turned out he’d just wanted to go and get some food. We said ‘why didn’t you ring us?’ and he said ‘I never used to, why would I now?’

“Pixie asked me to play in the charity football match about eight weeks ago, we bumped into each other on a night out and got chatting. She text me the next day. I thought it would be something different to do on a Sunday and Alzheimer’s Research UK is such a good cause to do it for.”

Ricky, who used to play as a semi-professional footballer before becoming a manager, said: “It’s been absolutely amazing, I’m so grateful to everyone for giving up their time. We’ve all turned up for the right reasons and we’ve raised a really good amount of money. I’m looking forward to the marathon, I’ve been applying for the last five years and never got a place, but I’ve been there to support others and it’s always a fantastic day. So to finally get a place for such a great cause is wonderful. My mum would be so proud to have seen us all out today.

“My mum was a very strong woman. She brought us up singlehandedly. All of us grew up and went on to have our own families, and that was when Mum started to get all her grandchildren’s names muddled up. We joked about it at the time but that was the first sign.

“She lived on her own in a flat and we all took it in turns to see her. Eventually she had to move in with my eldest brother but after a year of that it became clear she needed full time care. She saw out the last few months of her life in a care home called The Oaks Care Home in Eltham, which did a fantastic job of looking after her.

“She worked so hard for all us with lots of different jobs to pay the bills, from cleaning jobs, to working as a secretary and a cafeteria manager.

“She was so proud of us. She loved football and has shaped my love of the sport. Sadly, by the time Pixie was holding concerts, she was too far gone to go to one.

“That’s why we held this match, in honour of my mum who worked so hard for us all. I hope through dementia research there will come a time when no other families are robbed of their loved ones by dementia, like we have been.”

Before today’s match, Ricky had already raised £1,590 in fundraising of his £3,000 target, ahead of the marathon on Sunday 23 April.

“The event has raised vital funds for the charity, but also crucial awareness of a condition affecting over 850,000 people across the UK. Alzheimer’s Research UK is dedicated to ending the fear, harm and heartbreak of dementia, which simply couldn’t be done without our generous supporters like Ricky and Pixie.”

The celebrity players have all signed and donated their match-worn shirts to boost funds further. An online auction will start next week at www.ebay.co.uk/usr/alzheimersresearchuk.

To donate to Ricky’s fundraising page, go to www.justgiving.com/ricky-bennett3